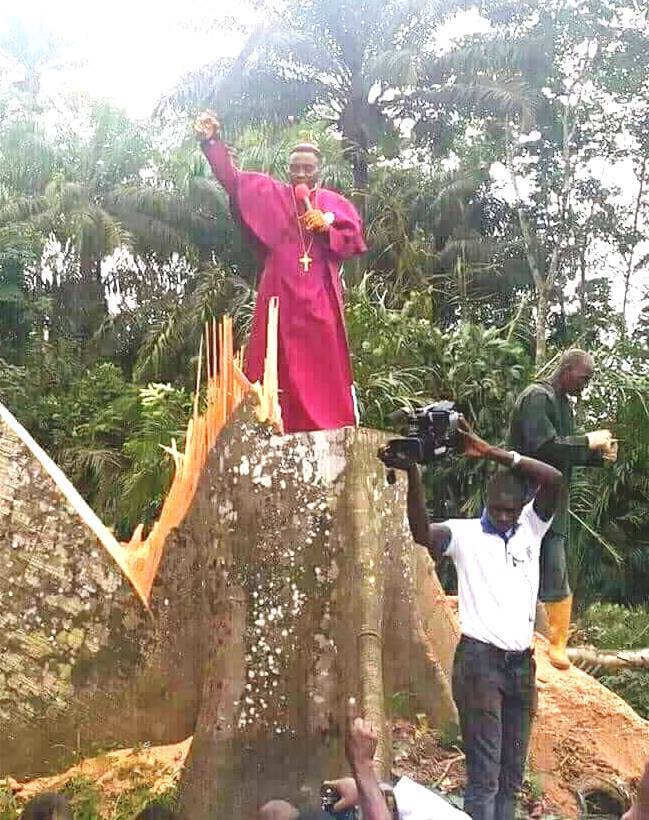 (Onitsha Nigeria: 20th August 2018)-Igbo Land may not survive environmentally in the next 50years. Trees and other leafy creatures as natural and sole suppliers of oxygen for human living and survival and absorbers of harmful human and industrial emissions such as carbon dioxide and carbon monoxide are facing total extinction in Igbo Land. Igbo Land, historically known as “a sub region” in the “rain forest region” of Nigeria shall in no distance decades become “non leafy rain region of Nigeria”; capable of being turned into left side of the Atlantic Ocean.

Trees are gifts of nature; with many growing on their own and beyond what mere mortals can put into life while others are capable of being recreated by living humans. In organized social climes, ancient trees are preserved as monuments alongside creation and efficient management of forest reserves including botanic homes and zoos. The world of medicine and pharmacy derive their origin and survival till date from trees and leafy environment.

But in our own case in Igbo Land, lives of these trees are being terminated with reckless abandon particularly by the so called “crusaders of Christ”; yet when traveled to overseas for holidays and other social engagements, the same “crusaders of Christ” spend hugely and in hard currency visiting preserved forest monuments including ancient trees and botanic homes.

But on their return to Igbo Land, the same ancient trees they paid heavily to see and take shelter under in overseas or foreign tourism are turned into objects of demonization and marked for destruction; likewise using them as extortionist tools to rip off or defraud their largely misinformed and greedy victims. The activities of these “prayer warriors and crusaders of Christ”, now hijacked by “merchants in the House of Christian God” spread like wildfire and found their way into the Catholic Church that used to be dogmatic and level headed. Their emergence and proliferation started way back in the Anglican and Pentecostal Churches before springing up in Catholic Church in Igbo Land.

Sowers of economic trees especially the fruit bearing ones in the Igbo Land of old used to roll out drums in celebration whenever they lived to witness the trees they planted yielding fruits. In my hometown of Ezinifite in Aguata LGA, I grew up in the 80s to hear of “Ube Nwa Mgbe-Afor” (pear tree planted long time ago by a daughter of the family born on Afor Market Day), “Okpoko Ube Nwile” (huge pear tree with fat and sweet fruit-pears) planted by my father (Nwile) decades ago when he was young. This is just to mention but few.

It is very important to state here too that the life saving oxygen and life threatening carbon availability ratio in Igbo Land is becoming acutely disproportionate and may most likely hit 20 percent for oxygen and 80 percent for monoxide and dioxide carbons by next 50 years, unless urgent and long term measures are concretely taken to reverse the dangerous trend, failure of which shall turn Igbo Land into ghost town by 50 years time from today..

Signs of environmental genocide are speedily and unstoppably creeping and gripping the landscape of the Igbo Race, no thanks to shortsightedness, long silence and inaction of the executive, legislative and judicial public office holders in Igbo Land and the unchecked activities of “prayer warriors or crusaders of Christ” now hijacked by “merchants in the House of Christian God”, in Igbo Land. Hiding under the cover of “breaking generational curses and destruction of evil spirits” or “witchcrafts”, these merchants in the House of Christian God have become a serious threat to environment and its security in Igbo Land. We must stand up and fight for the environment now. There are environmental law attorney and Environmental law practice services that can help us take action.

Just as wild life has almost completely been destroyed in Igbo Land and -apart from global negative impact on natural environment especially in rain forest regions through deforestation and industrialization, leafy environment in Igbo Land is acutely and terminally threatened by the following seven additional environmentally unfriendly activities:

1. Extended and individualist family system: i.e. allocation of land to every male child for establishment of his nuclear family living and lineage.

4. Government encroachment on preserved community lands and their indiscriminate allocations to individuals and groups for erection of building structures of multi purposes.

6. Absence of efficient government policy and legislation for management of the environment especially land, space and waste management or regulations

7. Unchecked cutting down of ancient economic trees and leafy environment by merchants in the House of Christian God, hiding under the cover of “prayer warriors or crusaders of Christ”.

In the seventh or last category, the level with which leafy environment especially ancient and other irreplaceable economic trees are being felled in most parts of Igbo Hinter Land by the so called “prayer warriors or crusaders of Christ” is alarming and deafening. This they do particularly during Easter, Christmas and August Mass return events in Igbo Hinter Land.

Today, it is difficult to see a tree of 40 years and above still standing without incurring the wrath of the said “prayer warriors or crusaders of Christ”. For any long surviving tree; be it iroko or bitter kola or “ngwu” or bread fruit or “akpu” or “achi” or rubber or “ukpaka” or “ogbu”, etc that catches the “crusade” attention of these “prayer warriors or crusaders of Christ” in any rural location, it is instantly tagged “evil tree” or “arena for gathering of witchcrafts” or “an evil covenant tree hindering material possession of members of the concerned family/clan/kindred”. As a result, the fate of such tree is “rest in pieces”.

After felling such trees and having them cut into pieces, the owners are in most cases told not to touch the woods made out of them to “avoid incurring the wrath of the same evil spirits or broken curses or witchcrafts chased out of same”; only for the same woods to be loaded and later sold by the said “prayer warriors or crusaders of Christ”. The wrath of these “prayer warriors or crusaders of Christ” has also been indiscriminately extended to a number of economic trees that are 40years and above in Igbo Land including pear, breadfruit (ukwa), “udala”, “ugili”, bitter cola (agba-inu), gova, cashew and mango trees, etc..

The seasonal acute or subsistent nature of these fruit bearing trees is compounded by their indiscriminate destruction by the said “prayer warriors or crusaders of Christ”; leading to acute seasonal scarcity and high costs in rural and urban markets. For instance, a cup of breadfruit that used to be sold at N50.00 is now sold at N140.00 in Onitsha and much more in non Igbo Land; likewise a piece of pear previously sold at N5.00 which is now N30.00 or more. Prices of other fruits in the above named category have also increased geometrically in addition to their diminishing supply quantities.

Other than serving as cash crops, these trees also control and prevent land or soil dismemberment called “erosions and gullies”. They checkmate flood and river overflow, protect the earth and beautify the environment; cure human ailment, provide food for the living, absorb dangerous carbons including human emitted carbon dioxide and industrial carbons such carbon monoxide. They equally protect against ozone layer depletion and have their life circle and after life recycling metamorphosed into minerals and nutrients for global agriculture, industrialization, growth, development and protection.

The same false message and hope is given to every clan or kindred or family and their members that hire them; whereby they are falsely and deceitfully made to believe that it is possible for everybody to own mansions and exotic cars in rural areas or become landlords and owners of SUV cars in townships. Resort to destruction of trees and kept ancient symbols of living for the people of the past becomes the common practice as conditions for realization of such false and deceitful promises or used as a reason responsible for failed realization of same.

Also to justify hundreds of thousands, if not millions of naira paid by the concerned misinformed and at times greedy family members to procure them for the so called “generational curse breaking/crusade”, these “prayer warriors or crusaders of Christ” turn around and let loose on innocent ancient economic trees and other members of leafy environment. Cash sums spent and ritual processes undergone by victims of these “prayer warriors and crusaders of Christ” are thunderous and deafening when mentioned. It is crookedly so lucrative that attraction of 10,000 people at a “crusade ground” by a starter “crusader” automatically means raking in at least N10m cash on average of N1000 per congregant.

This is not to talk of mega crusades organized by “mega crusaders of Christ”. In nowadays Catholic Church in Igbo Land, novena mass and prayers are commonly booked or said for a price and in absentia by some proprietors of priestly or adoration ministries for Igbo sons and daughters doing questionable businesses especially such involved drug, arms and human trafficking or shedding of human blood or human rituals.

Many families have also been ruined and made more disunited and dispute prone following the involvement of the so called “prayer warriors or crusaders of Christ”. Cases abound where fake charms are planted in the night by the said “prayer warriors or crusaders of Christ” and unearthed in the day with; twisted accusations; all for purpose of justifying huge sums so extorted or for returned-consultations especially where such victims are accessed to have the capacity to pay or foot the bills being demanded.

The so called “crusaders of Christ” also arrogate to themselves the status of being “invincible” or “indestructible”, yet they all wear bullet proof vests and move in company of well armed soldiers and anti robbery police squads. To maintain followership, forests are stormed with ancient trees marked for destruction. Yet mere shout of “Allahu Akbar” from a distance can make the entire congregants and their “crusaders of Christ” run for cover and disappear in a twinkle of an eye, thinking that Fulani Jihadists-the real enemies of Christian faith have arrived!

The activities of these “prayer warriors or crusaders of Christ” have become so menacing and destructive in Igbo Land that they can be likened to “anti cultural revolutionists”. This is because the greatest war against a race on earth is not only killing of members of the race, but dangerously to levy war against its cultural symbols such as libraries and living monuments or relics of their people of the past. Through the destructive activities of these so called “prayer warriors or crusaders of Christ”, it is becoming difficult, if not already difficult in Igbo Land to lay hands on living symbols of ways of life of our ancient people.

It is very difficult, for instance, to conduct a research into ways of life of our ancient people who lived 1000 years ago especially as it concerns their modes of communal and individual security, religion, agriculture, entertainment, noble living, medicine and cure, spiritualism, transport, trading, peace and conflict resolution, medium of exchange, farming methods, marriage, kingship, science and technology, astronomy, archeology, to mention but few.

All hands must be on deck to save our leafy environment and other ancient monuments in Igbo Land (covering Anambra, Enugu, Imo, Abia and Ebonyi States as well as Anioma in Delta State and Igbo speaking areas of Rivers State, Benue, Kogi, Cross River and Akwa Ibom) from the destructive hands of mercantilist “prayer warriors or crusaders of Christ”. The executive, legislative and judicial public office holders, members of the academia, OHANAEZE and concerned others home and abroad are called upon to rise and nip this ugly development in the bud before it is too late.

Nairobi to Buenos Aires: Review of the WTO’s quest for trade equity

10 thoughts on “Refreshed: Environmental Genocidists As Crusaders Of Christ In Igbo Land & Worrying Silence Of The Government  ”