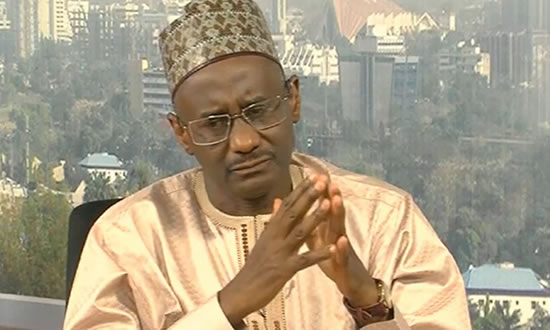 The action of President Muhammadu Buhari in the reinstatement of the suspended Executive Secretary of the National Health Insurance Scheme (NHIS), Usman Yusuf is a crude fashion of overruling the anti-graft crusade and a text book example of political hypocrisy and nepotism that have characterized the Muhammadu Buhari’s administration.

The aforementioned was the reaction rendered by the prominent civil Rights organization- HUMAN RIGHTS WRITERS ASSOCIATION OF NIGERIA (HURIWA) to the recent announcement of the overruling of the ministerial panel suspending the Daura Katsina state born controversial Executive Secretary of the National Health insurance scheme(NHIS) just as the Rights group criticised the minister of Information Lai Mohammed for celebrating naked hypocrisy by his unsustainable defense of the recall of a man who allegedly mismanaged an amount twice the amount for which the immediate past Spokesman of the Opposition Peoples Demicratic Party Chief Olisa Metuh is being witchhunted by the Economic and Financial Crimes Commission(EFCC).

HURIWA in a statement by the National Coordinator Comrade Emmanuel Onwubiko and the National Media Affairs Director Miss Zainab Yusuf, lamented that the current administration has openly demonstrated an unabashed partisan and one-sided war against graft which is meant to be used to carry out well coordinated political witchhunt of political opposition leaders even when the same government has continued to condone acts of alleged theft of public fund committed by disyant or close cousins of the President such as the recalled Executive Secretary of the National Health insurance scheme.

HURIWA has also asked the Health Minister Professor Isaac Adewole to resign honourably and engage in other productive functions outside of an administration that has lampooned his sense of judgment in the matter involving his surbordinate in the person of the reinstated Executive Secretary of NHIS or stay back and watch ad he will be disgraced for his courage to suspend a suspected distanced first cousin of President Muhammadu Buhari for alleged mismanagement of public fund under the administration of his kinsman..

“We have it on good authority that the reinstated NHIS ES is a cousin of President Muhammadu Buhari which explained why he bluntly disrespected the minister when he was given the matching order. We were told that the powerful cabal within the Presidency were actually instrumental to his unmeritorious appointment to head the strategic institution with lots of slush funds such as the dysfunctional National Health insurance scheme. These powerful persons in the Presidency who made sure that their man Friday is recalled will disgrace the health minister who almost marred their plots to control the huge funds available in the coffers of NHIS”.

HURIWA recalled that Yusuf was suspended by the Minister of Health, Isaac Adewole, in June 2017, following allegations of gross misconduct in addition to him been found guilty of alleged offences that ranged from nepotism to theft of public funds.

HURIWA criticised President Muhammadu Buhari for not considering Yusufa��s heavy indictment by a ministerial panel, before asking him to return to work even his administration has consistently misused Alhaji Ibrahim Magu led EFCC to go after members of political opposition in a bid to recover cash the then ruling party raised and spent as Presidential campaign fund but APC which wrestles power from PDP and outspent PDP is not being investigated over how it managed to put together the unimaginable huge financial war horse in 2015.

HURIWA believes that this nepotistic recall of the alleged distanced Cousin of President Muhammadu Buhari has knocked the final death nail to the coffin of the EFCC’s choreographed war against corruption. The group also stated that the decision is a direct breach of the Presidential oath of office sworn to by Muhammadu Buhari.

HURIWA said thus:” It is only in a Banana Republic will such a lawless action be taken by the President who simply sent the letter of reinstatement to his health minister Professor Adewole which amounted to a show of shame. It is also a huge humiliation that the health minister Professor Adewole was caught napping but simply confirmed receipt of the reinstatement letter, by simply saying: a�?It is true that the president has reinstated hima�?.

HURIWA recalled that the reinstatement letter urged Yusuf to work closely with the minister upon resumption.

HURIWA recalled that Health minister Profeszor Isaac Adewole had set up a committee to probe Dr.Yusuf and in a correspondence, the Minister stated that the investigative committee found him culpable in the discharge of his responsibilities.

HURIWA recalled that Adewole had written to Yusuf thus: a�?Please refer to my earlier letter ref C.405/1/132, dated 6th July 2017, suspending you from office for three months to allow for an interrupted administrative, investigative committee to look into the various allegations against you including that of monumental fraud, gross abuse of office and nepotism inimical to the NHIS scheme under your leadership,a�? the letter read.

HURIWA recalled the Minister also stating to Yusuf that: a�?While awaiting Mr Presidenta��s directive and considering that the committee found you culpable in many areas of your performance as the executive secretary of the NHIS, I am further extending your suspension from office pending the decision of his Excellency Mr President C-in-C on the report.a�?

HURIWA however carpeted President Muhammadu Buhari for hurriedly reubstating a man that was indicted of such grave financial wrongdoings.