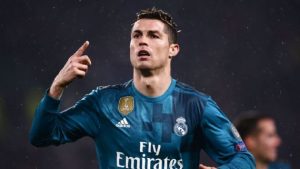 TURIN, Italy a�� Three thoughts from a remarkable Champions League quarterfinal, first leg, as Cristiano Ronaldo led Real Madrid to a 3-0 away win.

With 20 minutes left on the clock, the stands started emptying. Large sections of Juventus fans had seen enough, knowing that this Champions League quarterfinal was over and that the return leg in Madrid would basically be a formality.

Their apparent exodus came after Marcelo had made it 3-0, the cherry on a quite spectacular cake baked by a genius who is supposed to be on the downturn of his career. You will know this already, but please: enjoy Cristiano Ronaldo while hea��s around.

Ronaldo had already done most of the damage by that point, opening the scoring with a goal that even by his lofty standards was impressive, but it was soon cast into insignificance by the other-worldly, nonsensical slice of magic that would come later on and cause the home fans to rise as one and applaud him.

Juventus had barely touched the ball when Real took the lead in the third minute. Brilliant work down the left by Marcelo found Isco, who cut back to the edge of the six-yard box where Ronaldo was waiting. He flexed one of those colossal thigh muscles and flicked it into the corner. That made the great man the first-ever player to score in 10 consecutive Champions League games, stretching back to last seasona��s final. Mark yet another record down in the books.

The rest of the half was engaging but pretty low on quality. Juventus had most of the ball but seemed to lose the run of things at the crucial time, whether with the final ball or the finish: Keylor Navas saved a point-blank Gonzalo Higuain header, Paulo Dybala kicked the ball out instead of pressing on in attack when Dani Carvajal claimed to be injured. The closest either side came to a second goal was when Toni Kroos crashed a shot against the bar from way out.

Real were the better team in the second halfa�� then came Ronaldo. After a rare mix-up between Giorgio Chiellini and Gianluigi Buffon, Real had a chance to score through Lucas Vasquez but it looked like their opportunity had gone when the ball broke to Carvajal on the right. He crossed in the direction of Vasquez but then, as if from nowhere, Ronaldo soared into the air, seemed to pause and say to everyone a�?Watch this!a�? before thundering the most unbelievable overhead kick into the corner of the net.

It was the sort of thing that 99 percent of the worlda��s elite footballers (except for Peter Crouch) wouldna��t even think of, let alone try, let alone connect with let alone make such clean, perfect contact with. It was extraordinary. He is extraordinary.

A few minutes later Marcelo broke behind the Juve defence, the ball bobbled over Buffon and the Brazil international forced it home. Then began the exodus.

For much of the first half and some of the second, this wasna��t actually a great game in terms of technical football. There were too many mistakes, too many careless passes or too many wayward finishes.

In some ways ita��s reassuring that these two teams, two of the great giants of the European game, can still serve up relatively average fare. It also shows that all football is essentially the same: more often than not games are decided by fine margins, by one thing that one team does better than the other.

In this case, Reala��s big men simply showed up while Juvea��s didna��t. This was of course Ronaldoa��s night, a strut into the semifinals and it will tell you plenty that as the clock ticked over to 90 minutes he was forlornly stood in the Juventus half, genuinely furious with himself after missing a comparatively easy chance. That, as much as anything else, is what makes him great.

But Reala��s other key players were terrific too. For most of the first half their danger primarily came from Isco and Marcelo on the left, the men who carved out the first goal before Juventus really knew what was going on.

From that point Real were ahead and didna��t really look like losing that lead. But that was almost as much to do with Juventus not showing up as Reala��s aptitude at closing out a game.

JAVIER SORIANO/AFP/Getty Images
3. Dybala, Higuain let Juventus down
It was tricky to tell where the home fans were directing most of their frustration in the first half: was it referee Cuneyt Cakir, the target of increasing ire after successive close decisions went against Juventus, or their own players?

Both were justified, but more so the latter. Time and again they would work themselves into a promising position before spoiling things with an errant pass or careless shot. Greying men who probably spent the week in respectable jobs and enjoying a relaxed coffee jumped out of their seats to howl their displeasure. This dissent probably didna��t help matters on the pitch because this looked like a Juventus team trying far too hard, desperately attempting to force something special rather than taking the sensible, considered option. One more pass was attempted when they should have shot, a shot was tried when a pass was on.

Most of the frustration must be directed at Dybala and Higuain. They were supposed to be Juvea��s twin spearhead, the ones who got them out of trouble against Tottenham. But they were the worst offenders in the trying-too-hard stakes, entirely ineffective as they strained to be effective. Dybala summed it up neatly by getting himself sent off late on, shuffling off the field and left to ponder what might have been.