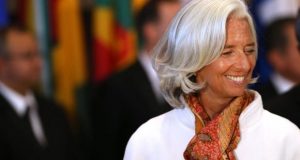 The Managing Director, International Monetary Fund, Christine Lagarde, has called on the Federal Government to remove fuel subsidy, saying it is the right thing to do.

By so doing, she opined, the country would be able to move funds into improving health, education, and infrastructure.

The IMF had in its 2019 Article IV Consultation on Nigeria noted that phasing out implicit fuel subsidies while strengthening social safety nets to mitigate the impact on the most vulnerable would help reduce the poverty gap and free up additional fiscal space in the country.

When reminded that the removal of subsidy was a sensitive issue to Nigerians, many of who live below the poverty line, Lagarde insisted that the right thing to do was for Nigeria to embark on total fuel subsidy removal.

She said, a�?I will give you the general principle. For various reasons and as a general principle, we believe that removing fossil fuel subsidies is the right way to go. If you look at our numbers from 2015, it is no less than about $5.2tn that is spent on fuel subsidies and the consequences thereof. And the Fiscal Affairs Department has actually identified how much would have been saved fiscally but also in terms of human lives, if there had been the right price on carbon emission as of 2015. Numbers are quite staggering.

a�?I would add as a footnote as far as Nigeria is concerned that, with the low revenue mobilisation that exists in the country in terms of tax to GDP, Nigeria is amongst the lowest. A real effort has to be done in order to maintain a good public finance situation for the country. And in order to direct investment towards health, education, and infrastructure.a�?

The IMF boss added, a�?If that was to happen, then there would be more public spending available to build hospitals, to build roads, to build schools, and to support education and health for the people.

a�?Now, how this is done is the more complicated path because there has to be a social protection safety net that is in place, so that the most exposed in the population do not take the brunt of the removal of subsidies principle. So that is the position we take.a�?

Between January and November 2018, the Nigerian National Petroleum Corporation spent a total of N623.16bn on fuel subsidy under its under-recovery arrangement.

Although the corporation insisted that it was not paying subsidy on petrol as it had no parliamentary approval for such, it revealed through the document presented to Federation Account Allocation Committee in December 2018, that what the NNPC had incurred as under-recovery in 11 months was N623.16bn.

Lagarde lamented that 70 per cent of the global economy was decelerating and as such, the Bretton Wood institution had cut its forecast across the board.

a�?So, our forecast for growth this year is 3.3 per cent, going back up, we hope in 2020 based on our forecast, to 3.6 per cent. But we contend that we are at a delicate moment and this expected rebound from 3.3 per cent in 2019 to 3.6 per cent in 2020 is precarious and subject to downside risks, ranging from unresolved trade tensions, yet high debt in some sectors and countries, both public and corporate, to the risk of weaker than expected growth in some stressed economies. And, of course, the consequences of whatever Brexit will be.a�?

In terms of policy recommendations, Lagarde suggested multiple policies that were country-specific, saying that there was no one size fits all.

a�?But we certainly would recommend two key principles. One is, do no harm. Second, do the right thing. So, do no harm. The key is to avoid the wrong policies, and this is especially the case for trade,a�? she added.

Earlier, the World Bank Group President, David Malpass, gave the assurance that the bank would help Africa tackle illicit fund flows because such funds ‘suck resources away from poor people, and from the ability of a country to really grow and develop.’

He added, a�?The bank has not nearly enough but expanding strength in helping people think about how to best keep track of financial flows and make sure that they are legitimate financial flows.

a�?This takes the form of technical assistance; it takes the form of close cooperation with the financial officials in the country, and it’s something countries, I think, are rising to the challenge, and trying to make it work better.  But clearly, more can always be done.a�?

The new World Bank boss decried the rising level of poverty in Africa, adding that the situation was jeopardising the bank’s goal of ending extreme poverty by 2030.

He said, a�?On current trends, per capita income in growth in sub-Saharan Africa as a whole is now projected to stay below one per cent until at least 2021, which elevates the risk of a further concentration of extreme poverty on the continent. Growth in median income will also be weak.

a�?This fact is extremely troubling because it jeopardises the World Bank’s primary goal of ending extreme poverty by 2030.

a�?Globally, extreme poverty has dropped to 700 million at the last count.  That’s down from much higher levels in the 1990’s and 2000’s.  But the number of people living in extreme poverty is on the rise in sub-Saharan Africa.

a�?By 2030, nearly nine in 10 extremely poor people will be Africans, and half of the world’s poor will be living in fragile and conflict-affected settings.  This calls for urgent action a�� by countries themselves and by the global community.a�?

We have to remove subsidy gradually, says finance minister

Meanwhile, the Minister of Finance,  Zainab Ahmed, noted that Nigeria would look into the advice by the IMF on subsidy removal but cautioned that this would be done in phases.

In an interview with Nigerian journalists, she said, a�?To the IMF, we just came out of the Article IV review. The review was a positive one and had good advice from the IMF to Nigeria and they have indicated that they are available to provide technical support to improve our liquidity management, our debt management and other fiscal measures.

a�?The advice from the IMF on fuel subsidy removal was good advice but also we have to implement it in a manner that is both successful and sustainable. We are not in a situation to wake up one day and just remove subsidy.

a�?We have to educate the people, we have to show Nigerians what the replacement for those subsidies will be. So, we have a lot of work to do. We also need to understand that you don’t remove large amounts of subsidy in one go, it has to be graduated and the public has to be well-informed on what you are trying to do.a�?

She explained that the President had directed that the Ministry of Finance looked at every area that required reforms.

She added, a�?I would say that the Sovereign Wealth Authority has been doing well if you look at where we are starting from, we have achieved quite a lot of progress by building more of the fund from where we met it and by utilising the savings at the Sovereign Wealth Authority for projects that are physically visible. We still have some movements to go but the movement is a positive one.a�?

She further asked the World Bank to review some of the initiatives that it had put in place; initiatives that involved the bank looking at implementation systems when they were providing funding for infrastructure.

a�?What we found in Nigeria is that the ESS that they have put in place is causing significant delays in the rollout of infrastructure. We understand that it is well intended but we’ve informed them that they need to review how they implement it so that we are not overtly slowed down because of the new proceedings,a�? she added.