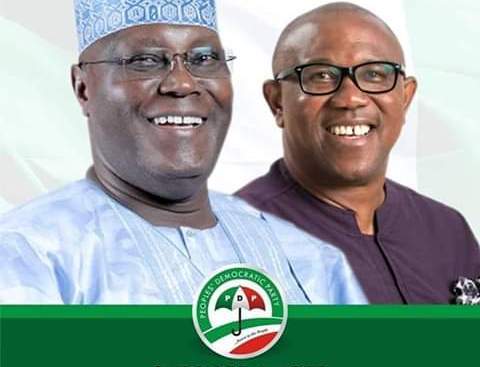 (SBCHROs, Nigeria: 3rd March 2019)-The trio of Atiku Abubakar, Peter Gregory Obi and People’s Democratic Party must avoid hiring “Gwomgworo” or politically exposed lawyers in their planned presidential election petition tribunal cases; legally expected to last for maximum of eight months or 240 days (180 days at first tribunal and 60 days at the Supreme Court); starting with filing notice within 21 days after the declaration of final results; SBCHROs; a coalition of 24 human rights and democracy organizations based in Southeast Nigeria said today in Onitsha Nigeria in a joint statement.

Whereby such “Gwomgworo” lawyers have been mistakenly hired in part or in whole, they must be persuasively withdrawn and replaced. To do this the trio should reach out to their contacts in the Nigerian intelligence and anti graft agencies for thorough background checks to ensure that members of their legal team are not owners of inexplicable and unsubstantiated cash and property wealth or regular “customers” of SSS, EFCC, ICPC or anti fraud unit of the Nigeria Police Force. The appointment of Dr. Levy Uzokwu, SAN, as the Lead-Counsel is a welcome development provided he is not found to be a “regular customer” or potential one to the likes of EFCC, ICPC, SSS or anti fraud unit of the NPF.

Gwomgworo Lawyers In Nigeria
“Gwomgworo” or politically exposed lawyers are noisy, establishment friendly and graft prone legal practitioners with a lot of dark spots. They are permanently in the Nigerian Government’s black book especially in the area of corruption and other forms of public immorality; making them leprously probating and reprobating on critical national issues including legal representations in matters against the State. “Gwomgworo” here, literally means a noisy and smoky 911 Lorry. In other words, they are immoral and integrity challenged legal practitioners with crookedly acquired stupendous cash and property wealth in their confines.

“Gwomgworo” lawyers are specifically those crookedly rich and immoral legal practitioners with so much cash and property wealth made through proxy or direct corruptive means; all rated to be far above the legitimate incomes or earnings of private legal practitioners in Nigeria or any part thereof; such that they will be too difficult to be defended when mirrored or scrutinized by the anti graft and intelligence agencies; particularly under politically and ill motivated circumstances.

When bounced on by the Police, EFCC, ICPC or SSS as Atiku/Obi lawyers, if hired, such “Gwomgworo” lawyers can bounce back on cases entrusted in their hands and get them messed up or sabotaged so as to save their faces before the graft or intelligence agencies. “Gwomgworo” lawyers under reference are dominated by the Silk or Senior Advocates of Nigerian Supreme Court particularly those in canonization book of the Southwest based print and electronic media. In their ranks, too, are some “human rights” or “activist” lawyers mostly found in Abuja and Lagos. They are defenders of the oppressed and democracy yesterday but turned oppressors or defenders of the oppressors and enemies of democracy today.

It is therefore strongly advised by the Coalition that the trio of Atiku Abubakar, Peter Obi and People’s Democratic Party should be carefully guided in the selection of lawyers leading their planned electoral court cases. Rejected, too, are the social media reports of “100 SANs and others volunteering to help Atiku and Obi in retrieving their stolen mandate”. This, if true, is nothing short of nothingness and a huge distraction.

What are needed in the instant case are not “Gwomgworo lawyers or “100 SANs and ors”; but water-tight paper, electronic and witness based pieces of evidence and a team of forensically grounded and brilliant (the law lords) lawyers with three SANs and a number of other vibrant and articulate lawyers including law academicians and those with expertise in Nigerian constitutionalism and electoral laws.

In the case of Obi v Ngige, INEC and ors (2003-2006) and other landmark cases he won, it was few brilliant and focused legal practitioners, armed with water-tightly loaded evidence versus “Gwomgworo” lawyers armed with trailer load of fictitious paper evidence; to the extent that in Obi’s governorship poll tribunal case, Ngige assembled several SANs with over 500 witnesses and “Ghana-must-go” bags of fictitious documents as against Obi’s one SAN and few other vibrant lawyers with only 45 witnesses. In the end, Obi won the case both at tribunal and Enugu Division of the Court of Appeal.

As reported by the British Broadcasting Corporation (BBC) on 1stSeptember 2017, presidential, parliamentary and local elections were held in Kenya on 8th August 2017 and the country’s electoral commission declared Uhuru Kenyatta returned or winner by a margin of 1.4m votes against his main challenger, Mr. Raila Odinga. Mr. Odinga also described the Kenyan electoral commission as “rotten” and demanded prosecutions and resignations.

The declaration was done in spite of widespread irregularities and violence; forcing the main challenger, Raila Odinga to refuse to concede, but resorted to court litigations. The results of the Presidential Poll were subsequently challenged in court and on 1st September 2017, the Kenyan Supreme Court voided the entire results and ordered for fresh poll within sixty days. Chief Justice David Maraga had in his landmark judgment found that the Presidential Poll was not conducted in accordance with the Kenyan constitution; declaring it “invalid, null and void”. The incumbent President, Uhuru Kenyatta reacted to the Supreme Court ruling by describing the judges as “wakora” (crooks) but promised to respect and obey the apex court verdict.

Lessons From The Verdict To Atiku, Obi, PDP & Nigerians

As was the case in Nigeria’s recent armada of fraud characterized Presidential Poll, the international election monitors from the EU, the African Union and the US who had after the poll said “there was no major fraud on polling day and urged Mr. Odinga to concede defeat and congratulate his winner, President Kenyatta”; turn-coated or spoke from both sides of their mouth after the Supreme Court nullification verdict, saying “the court ruling represented a historic day for Kenya and we have always said that people who feel aggrieved should seek the path of the courts”. Marietje Schaake, the head of the EU Observer Mission, further added that “the monitors had at the time pointed to irregularities and encouraged the Kenyan authorities to deal with them”.

This is a big lesson to all Nigerians. The trio of Atiku Abubakar, Peter Obi and People’s Democratic Party and all Nigerians especially lovers and defenders of democracy are therefore respectfully invited to open the following link and read in details the said BBC report on nullification of the Kenyan Presidential Poll. The link is here: https://www.bbc.com/news/world-africa-41123329?fbclid=IwAR0RdoyxZ-sj0Pc5_KyhcZCRE2R5uMnXXEGaoHtMyMdFVKHdWUvoCgjx04o .

Sponsorship from Aso Rock of shenanigans and paid others including rented crowd of women from Abuja crowd renting markets and others masquerading as industrial union leaders or those who renewed their already lost bids to be made Attorney Gen of the Federation after 29th May 2019, etc; are all clear signs of the fact that Aso Rock and its leprous electoral commission is irritated, jittery and in panic mood and afraid to boldly go to court in defense of its armada of electoral fraud, called “2019 Presidential Poll”.

As Kenya is now the first country in Africa to get its fraudulent poll results judicially nullified, Nigeria can also be the first country in Africa to get its fraudulently declared President judicially ousted and replaced with the true winner; after all, the State of Anambra has remained the first State in Nigeria to judicially installed as a Governor the undeclared winner of massively rigged governorship poll; likewise the State being the first to introduce staggered electoral calendar and invalidation of unlawful governorship impeachment in the history of Nigeria.

The PDP and its Presidential and Vice Presidential Candidates and all Nigerians are hereby called upon not to be dissuaded by the antics of the Aso Rock hired shenanigans and paid others who use different mediums and tactics as above highlighted to discourage the trio from heading to electoral courts to recover their brutally stolen mandate freely given to them by the majority of Nigerian voters. The trio must be strengthened and emboldened by the referenced verdict of the Kenyan Supreme Court and strive to replicate it in Nigeria before next 8 months.

However, the recent statements of the Party restating its resolve not to be intimidated or dissuaded from going to electoral courts have gladdened the hearts of most Nigerians especially those that risked their lives and liberties to vote for the Party and its Presidential and Vice Presidential Candidates. The bold resolve is also a huge consolation for millions who came out to vote but were chased away, shot at, frustrated, scared, denied voting or have their voted ballot papers fumbled and thrashed in the trash container.

We are not unaware of fears being entertained in several social clusters in Nigeria or any part therefore about the way and manner the country’s judiciary has been raped and politicized by the diarchy styled federal executive; prompting dimming hopes in the country’s judiciary as the true last hope for ordinary Nigerians; but Nigerians must not abandon the Judiciary, because doing so will be the end of the country and her People.

For instance, we share the sentiments of most Nigerians that the current President of the Court of Appeal (Zainab Adamu Bulkachuwa) in whose confine selection of members of electoral tribunals in Nigeria lies; is also the wife of the APC Senator-elect for Bauchi North in Bauchi State (Adamu Bulkachuwa); but there are still established ways to successfully handle corrupt or compromised judges or those with vested interests; such as availability of watertight evidence, knowledgeable and integrity personified lawyers and involvement of conscience of the society (i.e. media, rights and democracy watchdogs and sanction safeguards).

It has gotten so bad in Nigeria that those equipped with the titles of “Senior Advocates of the Supreme Court of Nigeria”, SANs, have also abandoned the Judiciary to the extent that the likes of Olisa Agbakoba, SAN, and Femi Falana, SAN, etc are now leading campaigns urging aggrieved parties such as Atiku, Abubakar, Peter Obi; their Party and generality of Nigerians “not to go to court” or “not to waste their time, resources and energies going to same because their chances of victory are minutely slim”.

Going to court, strictly speaking, just like going to the poll or voting in the poll, is not for sole purpose of winning a case or getting one’s voted candidate to be mandatorily declared winner by the electoral body. Apart from purposes of “ratio decidendi” or “orbiter dicta or dictum”, sub “ratio decidendi” or minority judgment and general growth and advancement of democracy, human rights and rule of law are uniquely part of same. In criminology and law, when a crime is committed and there is no documentation or conclusive investigation, then no crime is committed.

If PDP had gone to court against the scientific rigging of 2015 Presidential Poll including massive inflation of vote figures and other electoral malpractices perpetrated mostly in Northern Nigeria, several anomalies and ill fated policies put in place by INEC which reared their ugly heads again and corrupted the referenced armada of electoral fraud called “2019 Presidential Poll” would have been critically addressed.

Apart from keeping the hopes of millions of Nigerian voters who are the undeclared winners of the 2019 Presidential Poll alive and retrieving back their sacred mandate, the final pronouncement of the Supreme Court in the instant case will holistically address and criminalize massive poll malpractices in Northern Nigeria including underage voting, issuance of PVCs to aliens, multiple voting and mass thumb printing, rapacious padding or inflation of vote figures and lopsided and ethno-racial poll security arrangements, etc. By the time the culpable INEC officials and heads of security agencies and others are identified through public petitions and other measures and judicially sent to jail, others after them will have learnt their lessons.

Groups In The Coalition:
1. Int’l Society for Civil Liberties & the Rule of Law (Onitsha)

PIUS ADESANMI…. … And I Cried