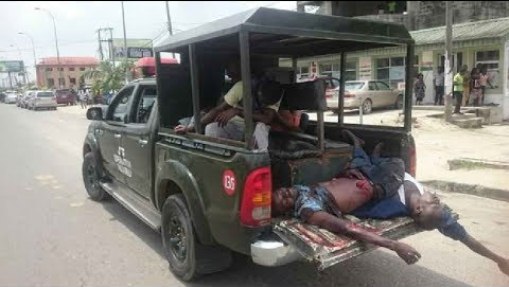 (Intersociety Nigeria: 21st June 2018)-The leadership of Int’l Society for Civil Liberties & the Rule of Law will not join issues with hired mushroom groups and individuals (profiteers of human tragedies, defenders of the oppressors and agents of the dark ages) flooding, tormenting and corrupting the present Nigerian Human Rights Community. These mushroom groups have injuriously been parading themselves as “human rights groups and activists” especially since mid 2015 when the present central Government came to civil power.

As newest agents of humans’ inhumanity to fellow humans in Nigeria, they are one of the tragedies of the present political dispensation chaired by the present central Government of Nigeria. As a grounded and free born indigenous human rights group in Nigeria, we are fully aware that Nigeria’s Human Rights Community is in acute sorry state-whereby a good number of erstwhile frontline defenders and promoters of human rights have mindlessly turned to defenders and supporters of human butchers or barbarians.

It is so shocking and shameful that for purposes of stomach insatiability, primitive materialism and social class and power, a large number of hitherto respected rights activists or groups in Nigeria have become defenders and promoters of human butchers or barbarians. As a matter of fact, things have acutely fallen apart in the Nigerian Human Rights Community. From the present composition of leadership of the National Human Rights Commission to former Lagos School of Social Sainthood; the list is endless. It is so bad to the extent that remnants of real human rights defenders in the country are today scorned; mocked and described by their former colleagues who are now promoters and supporters of human barbarism as wailers.

It is our resolve, therefore, not to join issues with hired mushroom groups parading themselves as “human rights groups or activists” in today’s Nigeria. Our intelligence findings have clearly shown that these groups are not only mushrooms but also armed by their sponsors and promoters with laptops and palmtops and quartered in designated corners within or close to the official establishments of their sponsors and promoters. Most of them, if not all do not have identifiable and credible physical and electronic addresses such as independent office addresses and websites. Their sponsors and promoters are largely, if not substantially drawn from the country’s top public offices including those in top security, ministerial and presidential positions.

In most, if not in all cases, rejoinders and other image laundering written materials bearing the names of the said pro human barbarians’ groups or individuals are prepared or vetted by their sponsors or promoters before they go to the media. The corrupted and bastardized political system in Nigeria under the present dispensation has also thrown up thriving Abuja and Lagos markets where rented crowd or protesters or picketers are purchased by disgruntled and culprit members of Nigeria’s Public Office Holders and sent to selected Nigerian streets or key diplomatic missions and public offices for hired protests in favour of their sponsors and promoters.

Therefore, let it be firmly stated that Intersociety can never be intimidated as the saying goes that “a fowl with broken leg is not sold at homestead market”. That is to say that we fully understand the tricks and pranks of those hired mushroom groups and individuals and will never join issues with them by discussing their matters or issues raised; except if credibly raised publicly by their sponsors in their official capacities.

As a research and intellect based rights advocacy organization, we are legitimately and legally accountable for publications and reports originally written and issued in our name, under our seal and from our corporate headquarters. We also welcome genuine enquiries, clarifications, responses, pieces of advice, commendations and constructive condemnations over such reports and publications during and after their issuance.

Further, let it be firmly and clearly stated again that Intersociety does not give a damn about whose ox is gored in its rights advocacy activities. Our activities originate from grassroots and end with grassroots and are beyond what money or influence can buy. This explains why we have not received a dime from any external funding body or institution since 2008 when we were born. Our organization till date generates few logistics it needs locally and from credible sources; in addition to maximum use of ICT facilities and in-kind mental resources from its expert partners and volunteers as well as robust goodwill it enjoys in the hands of its media friends who publish its publications free of charge and till date.

Intersociety, therefore, is beyond what anybody or group can influence or control or buy over. In the case of Pro Biafra groups including “Indigenous People of Biafra”, which President Muhammadu Buhari, the Defence Headquarters and the Nigerian Army proclaimed “terror group” on 15th and 17th September 2017, Intersociety is grounded in national, regional and international laws and consequently act accordingly. Massacring civilians in war situations is internationally, regionally and locally abominable and unlawful; not to talk of perpetrating same under none war situations or disproportionate expressive policing circumstances.

We have in recent times agreed and disagreed and still agree and disagree openly with leaderships of these Pro Biafra groups including the Biafra Indigenous People; likewise other faith, indigenous, social and rights groups as well as government and its security and justice establishments. It is important to state clearly that in matters of grievous rights abuses such as recent massacre by soldiers of the Nigerian Army of no fewer than 150 pro Biafra activists and maiming of over 100 others in Abia State, compromises and sentiments are never allowed no matter the amount of pressure from any quarter.

It is also important to state that our advocacy attention is instantly drawn whenever and wherever rights abuses or perversion of justice and rule of law are taking place. This is irrespective of their social, tribal, racial or religious backgrounds or settings. We had few years ago in Edo State, taken side with the High Command of the Nigeria Police Force in Abuja over its commendable investigation report concerning the death of one Oyerinde, which the then Government of Edo State brazenly politicized and publicly stained.

We have risen in strong condemnation in recent times of the killing of rival Muslims by the so called “Zamfara Islamist Bandits” in Kaduna and Zamfara States; likewise the massacre by Nigerian Army of over a thousand members of the Islamic Movement in Nigeria or Shiite Muslims as well as terminal wounding and perpetual incarceration of their leader and his wife-Zaky El-Zaky and Malama Zeenatu.

We have also spoken out strongly against the death of hundreds of civilians in military custody in Borno, jet-killing of 236 Christian IDPs and 50 rural Christians in Borno and Adamawa States; likewise the slaughtering by Jihadist Fulani Herdsmen of thousands of Middle Belt Christians and destruction of their churches. The total failure of the Nigerian security forces to end the killings was also condemned and still condemn; likewise the gross lopsidedness in the composition of the present security establishments in the country.

The Hand of Esau and the Voice of Jacob

OBAZE:…Before a Dog Visits the Butcher…