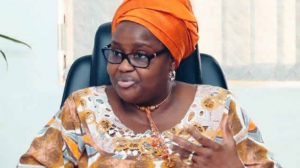 The House of Representatives on Thursday resolved to investigate the acting Director-General of the National Pension Commission, Aisha Dahiru-Umar, over alleged illegal recruitments and increment of her remuneration.

At the plenary on Thursday, a member of the House, Mr Benjamin Wayo, moved a motion on the alleged violation of the PENCOM Act and the illegal appointment and misuse of public funds, which was unanimously adopted by the lawmakers.

Moving the motion, Wayo said 19 months after the constitution of the PENCOM board by the President Muhammadu Buhari, the list of the nominees had not been sent to the Senate for confirmation. He said the board had not been able to commence duties as a result.

Wayo pointed out that Buhari had been “ill-advised” to have appointed an individual who was the managing director of a pension company as the head of the board. This, he said, was in contravention of the PENCOM Act.

He recalled that Vice-President Yemi Osinbajo, as acting President, rectified the matter and appointed someone else.

“Till today, 19 months after, the board has yet to commence duties,” he said.

The lawmaker alleged that that the current acting DG had increased the number of directors in PENCOM from 10 to 17 and jacked up collective benefits and entitlements by 300 per cent illegally.

The lawmaker said the Net Assets Value of the contributory pension fund as of October 28, 2018 stood at N8.779tn, with the number of contributors also grown to 8.90 million to date.

He expressed concern that in the absence of a proper structure put in place, including the commission’s board, the lot of N8.779tn would be left in the care of an acting DG.

Wayo further said, “The PenCom is an institution that has the removal of the former director-general for misappropriation of its funds in a single transaction to the tune of N1bn to ASO Savings, which was also in financial crisis at the time, for onward access by a family member’s business, which money has yet to be recovered from ASO Savings.

“The acting Director-General, Mrs Dahir Umar, has unilaterally, without any backing of the law, increased her terminal benefits and that of other senior staff of the commission by an outrageous 300 per cent and has also jacked up the number of PenCom general managers from 10 to 17, clearly in breach of the extant laws governing the institution of PenCom.”

The lawmaker stated, “It is dangerous and too risky to leave a treasury of N9tn without proper custodians and regulators.”

Wayo called for a thorough investigation on the matter.

Commenting on the situation, Mr Gabriel Onyenwife, noted that the PENCOM Act stipulates the constitution of a board for the running of the affairs of the pension office. He stated that violation of the Act was an illegality that should be deemed void and of no consequence.

The Majority Leader, Femi Gbajabiamila, however, stated that the law recognised presumption of regularity. He said the President had sent the list of PENCOM board nominees to the Senate and it was the upper chamber that had refused to consider and confirm the nominees.

Gbajabiamila pointed out that if all that had been done was illegal, then it meant that the pensions already paid were illegal and the payments be withdrawn from the beneficiaries.

The Speaker, Yakubu Dogara, put the motion to voice vote and it was unanimously adopted.