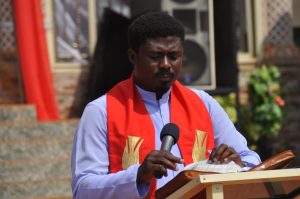 The Spiritual Director of Holy Ghost Adoration Ministry, Uke, Anambra State, Rev. Fr. Emmanuel Obimma, on Wednesday called on President Muhammad Buhari to resign his appointment saying that tension in the country was getting out of control with him not able to hold a grip on it.

The cleric, who is popularly known as Ebubemmonso, made the call in his country home, Umudioka, Idemili North Local Government Area of Anambra, on the occasion of the 7th year celebration of his priestly ordination.

He said: “In actual fact, there is crisis in the country and President Muhammad Buhari is not in control of this country. People are dying on daily basis and I am not happy with it at all.

“There is indeed crisis in the country. I pray that our good Lord will salvage this country Nigeria. Even though those in authority are denying that there is political unrest in the country. I thank God, that God is answering our prayers. I believe that very soon all these frictions, fracas and crisis will come to an end.

“My message to President Muhammadu Buhari is let him resign honourably since he cannot control the country. Not only that, he is a tribalistic, sectional leader.

As you can see, his strength can no longer carry him. I am envisaging a situation where he will not be alive to complete the second term, if he comes out to campaign again.

“Let him find people who have the strength and capacity of managing the nation to carry on the baton. Nigeria is a big country and needs experts who have perfected in the political field to take control of the affairs Nation. President Buhari is not that man.”

Ebubemmonso said that the diverse interests of the Senate and Presidency have ignited confusion on the polity to the extent that “I don’t know what to believe.”

He accused the ruling All Progressives Congress (APC) of warming up for election rigging, saying that the party can never win election by vote counting.

While noting that “a government that is built on selfishness, nepotism and injustice does deserve to come back for a second tenure”, he said that people are not happy with the government.

“They knew that they under-performed. What of those promises that Muhammadu Buhari made to the nation before the election? None was accomplished. That, for me, makes this government one of deception. Running a government with deceit is very, very bad,” he added.

Rev. Fr. Obimma equally took a swipe at Ohanaeze Ndigbo, saying that though Igbo people were marginalised, their voices are not being adequately heard.

He demanded an unreserved apology from President Buhari to Ndigbo, particularly members of the Indigenous People of Biafra (IPOB) who were prescribed for agitating for their right.

Obimma said: “IPOB was branded a terrorist group even when terror groups like Fulani herdsmen and Boko Haram killing people were handled with kid gloves.

“Ohanaeze is representing a section which is the Igbos; let them come out and stand for Igbos, so the world and Igbos at large will know they are standing in for them.

“They can’t be answering Ohanaeze Ndigbo for nothing. I am not trying to say that they have not been making efforts but their efforts are not enough.

“IPOB came up as a result of poor governance and they are agitating that the Federal Government is marginalising them.

“Igbos have been undergoing marginalisation, that was the crusade of Nnamdi Kanu but he was suppressed and intimidated. I want to tell the Federal Government that you can never kill an ideology.

“I advise IPOB to go for peace even in their agitations, let their motto be love. Without mincing words, I stand here to tell the country that IPOB agitations are right. The agitations about the sovereign state of Biafra, about intimidation and suppression, they are right, so let Federal Government look into it.”

The cleric urged the Federal Government to look into the agitations of IPOB noting that it cannot simply end by shooting or killing them on daily basis.

“Buhari should register an apology to Ndigbo. How can innocent people who are agitating be proscribed?

I stand with Buhari Billboards and cars Resurface in Abuja Nigeria

APC: Their Party, Their Enemies!