Resurgent insecurity, PMB’s legacies and the man behind the mask

Resurgent insecurity, PMB’s legacies and the man behind the mask 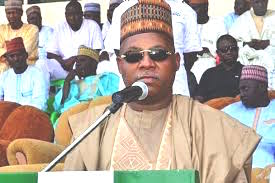 There are several clandestine plots to frustrate and blur the legacies of President Muhammadu Buhari in battling the multifaceted insecurities to a standstill in Nigeria. Some politicians who are pulling the strings are gradually exposing themselves by unguarded public exclamations.

The immediate past Governor of Borno state, and Senator representing Borno Central senatorial district, Alhaji Kashim Shettima is suspected as one of the latest entrants into this plot. He belongs to Nigeria’s league of former Governors, who transmutes into the Senate not necessarily by merit; but by crude manipulation of the people.

What is however a common denominator with these ex-governors is the vagueness of their insistence to be in the Senate. Every one of them, without exception retires from governorship into the Senate in pursuit of higher political ambitions at the national level.

One can excuse the underperformance of some of these ex-governors; but its painful to forgive them for plunging their states into insecurities, penury, hunger, poverty and disease. One becomes angrier that these former governors are also neophytes in legislative business.

The contributions of such ex-governors to debates and motions in the parliament during plenaries infuriates, lacks depth and wisdom. The national question is often thrown overboard; while patriotism is unconscionably sent on sabbatical leave.

Sen. Shettima, the Senate Committee Chairman on interior belongs to this clan of Senators contaminating the reverence of the Red Chamber. He parrots endlessly, both within and outside the Senate Chambers. What betrays him most is his glibness and the excitement to mouth inanities.

Less than a year in the Senate, Sen. Shettima divulged his motives. As guest speaker at the 17th edition of Daily Trust Dialogue held in Abuja in January 2020, Sen. Shettima unconsciously hinted of his obsession for being in Abuja. He said; If I have my way; now that I am in Abuja, I won’t mind being part of the cabals. But I would rather prefer to call it power brokers or inner caucus.”

With such outpourings, it leaves no one in doubt that Sen. Shettima migrated into the Senate in search of his personal greener pastures on the political turf. He is not in the senate to either serve the interest of his constituents or Nigeria, but someone who fits into the description of a vagabond in power.

Shettima nurses personal political dreams that’s why he is hibernating in the Senate, which is his inalienable right. But what is repugnant in his conduct is the desperation to run down personalities and institutions to achieve his ambition.

He governed Borno state for eight years -2011 to 2019. His first tenure (2011 to 2015) was the embryonic stage of Boko Haram insurgency. He was elected Governor at a time Boko Haram terrorism was at its infantile stage. But he is directly guilty as one of the leaders in the state who handled the Boko Haram insurgency with kid gloves, romanced it to fester, built safety nests for its offspring and embalmed it with kingly regalia.

Today, Boko Haram has morphed into a major national security threat, with its variant in ISWAP terrorism, terminating thousands of precious lives; destruction of properties estimated at over eight billion dollars. If there is a state in Nigeria whose memory invokes pain in Nigerians is Borno state because of Boko Haram atrocities.

That is where it started, mushroomed and grew into a national plaque. If Sen. Shettima has reason to admit now that he exited Borno state Government House, Maiduguri and left the state in a better security condition than he met it in 2011, it is because of the astuteness of President Muhammadu Buhari and the dexterity of the current Security Chiefs in taming the monster of insurgency.

Shettima has forgotten that twice in his first tenure as Governor, Boko Haram attempted to overrun Borno Government House Maiduguri. He escaped narrowly by providence or else, he would have been captured and ferried off. He would have been one of their priciest hostages by now.

President Buhari and the current Security Chiefs brought sanity in the counter-terrorism campaigns in the Northeast and Borno state in particular. As the then sitting Governor of Borno, in 2016, Sen. Shettima confessed the exceptional successes the military recorded against Boko Haram in an interview he granted News Agency of Nigeria in Maiduguri. He said; “Maiduguri is more secured than even Lagos or Abuja. There are 2 million people living in Maiduguri; we celebrated Sallah without any incident.”

Paradoxically, the same Sen. Shettima who is part of problem has the impudence to castigate and lampoon the Nigerian Military over their recent handling of Boko Haram/ISWAP terrorism in Borno state. He has embarked on campaigns to undermine the military operations against Boko Haram/ISWAP terrorists’ in Borno to tacitly rubbish the legacies’ of President Buhari on insurgency.

Perhaps, Sen. Sertima’s desperation to be noticed and probably be fingered into his concept of a “cabal” in Abuja has compelled him to make profane utterances. Shettima has marketed himself as a confounding personality in contradictions.

While seeking to shoot himself into limelight, and diminish President Buhari’s legacies on insecurity, Sen. Shettima is using the unfortunate Boko Haram attack on Auno village, near Maiduguri which terminated the lives of some travelers as his launchpad.

At one breath, Shettima appears to eulogize President Buhari’s efforts on extinguishing the fires of Boko Haram; and at the same time, he gleefully recants himself like a demented and confused man at another instance.

In a pathetic contradictory fashion Sen. Shettima, at another instance in plenary while speaking on Order 42 and 52 of the Senate rules, claimed the military showed no resistance to the attacks despite the proximity of the scene to the military formation and called for investigation of the incident.

Dissatisfied that he has not vibrated enough Sen. Shettima in another separate public statement advised the Nigerian Defence Headquarters (DHQ) to constitute a panel of inquiry into the insurgents killings in Auno village.

He said of the insurgents attacks, “Of them all, the incident at Auno on Sunday night has been the most dehumanizing and disturbing. As Senator representing Borno Central where Auno is situated, I have the option of lobbying my colleagues and sponsoring a motion for the Senate to constitute an investigative panel on the Auno incident, which clearly begs for some answers.”

This is very disingenuous; unsure and an uncertain representative of people. It’s difficult to determine what message Sen. Shettima really intended to convey on the Auno village attack by Boko Haram. Is he advising DHQs or lobbying his colleagues in the Senate to pass a resolution compelling DHQs to investigate the incident?

Sen. Shettima has a queer sense of representation of his people at the Senate. Beside the crafty and clever manner, he has attempted to shift the blame either to President Buhari or the Nigerian military has not eliminated his complicity in the problem of insurgency in Borno.

He passionately played to sentiments by endearingly referring to his constituents in trauma of terrorism. But he was mute when the 2020 defence was deliberated in the Senate and a meagre sum allocated to security agencies in the age of multiple battles with insurgencies. At the point of debates on proper funding of the Military, to effectively counter insurgency, Sen. Shettima played the lame duck role.

Shettima was a part of the cabal in the Senate which frustrated or kicked against allocation of adequate funds for procurement of weapons to battle Boko Haram and ISWAP terrorists. Today, the same Senator is shedding crocodile tears and claiming to feel for the affliction of his people.

It is hypocritic and surely, not the path to stardom in national politics. By his latest actions, Sen. Shettima has undisguisedly exposed himself as the man behind the attempt to rubbish President Buhari’s legacies on the war against insurgency. He hates Mr. President much as he hates his traumatized people.

Someone should volunteer to hint Sen. Shettima that he is on a wrong voyage. There are insinuations that Sen. Shettima is believed to be keenly interested in deputizing the incumbent Vice President, Prof. Yemi Osinbajo when he vies for the Presidency of Nigeria in 2023.

But Sen. Shettima’s greatest albatross is that he is not ready to wait or carefully navigate his path. He has begun on a faulty foundation. His desperation for national visibility has pushed him into near insane comments on sensitive issues.

It is clear to discerning minds that Sen. Shettima is plotting to use the Northeast crisis to get a bargain in same style, former President Olusegun Obasanjo in 2007 and 2011 hid under assuaging militancy in the Niger Delta region by drafting and foisting Dr. Goodluck Jonathan on Nigerians.

It’s a bad game for Sen. Shettima because Nigerians are wiser. With his present antics, he has rather courted the image of a desperate political saboteur who thinks of himself alone. He smacks of a leader who can even sacrifice or compromise the peace and security of his people for personal political ambitions. Shettima should tramp softly or else, he is bound to crash land.

Duniya is a public affairs analyst and wrote from ATBU, Bauchi State.

Is Election War in Nigeria?

Niger-delta Oil And The Politics Of Compensation

8 thoughts on “Resurgent insecurity, PMB's legacies and the man behind the mask”