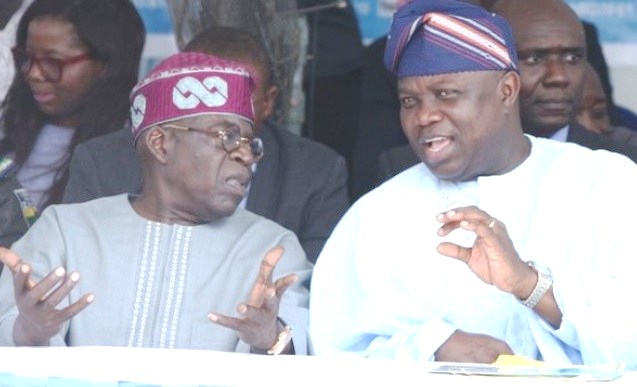 Worse, the governor’s prospects of serving out the rest of his first term, it was learnt, was hanging in the balance upon claims of momentum to remove him from office if he does not drop his second term aspiration.

The governor’s support base which had been built around Asiwaju Bola Ahmed Tinubu unravelled after it emerged that a major contender for his office had emerged from one of the major political structures in the ruling All Progressives Congress, APC in the state, the Mandate Group.

Ambode’s prospects outside the APC were also not being helped with the emergence of billionaire Mr. Femi Otedola as an aspirant on the platform of the Peoples Democratic Party, PDP.

Otedola who is vacationing in Paris, it was learnt, has, however, vowed not to contest against Ambode.

SUCCESSION CRISIS
In the face of the unfolding battle, many stakeholders spoke in hushed tones yesterday on the crisis of a second term that has shadowed successive successors of the political leader of the state, Asiwaju Bola Tinubu.

Political sources in the state yesterday said that after challenges that Tinubu got from Fashola, it was unlikely that Hamzat, one of Fashola’s options as a successor could get Tinubu’s support.

That means that the momentum was gravitating towards Sanwo-Olu who ironically served as a commissioner in the Fashola government.

57 LG/LCDA chiefs desert Ambode.
It was learnt yesterday that the chairmen of the 57 local government councils and development areas in the state had in a show of force endorsed Sanwo-Olu’s forms.

“That was meant to send a message to Ambode,” a political chieftain told Vanguard yesterday.

IMPEACHMENT RUMOURS
Ambode’s options were last night being narrowed as reports of an impeachment plot started swirling around political meetings around Lagos House and the State House of Assembly. The governor’s Chief Press Secretary, Mr. Habib Haruna, however, dismissed the reports of impeachment simply saying “it is not true.”

It was also learnt that emissaries sent by Ambode to Tinubu had been shut out, making the resolution of the Ambode crisis difficult. The situation left many political stakeholders in the lurch, with many saying that they were confused. This was mainly caused by the fact that Tinubu as at last night had not made a pronouncement.

However, the body language of the national leader was reflected by the fact that many of his trusted aides were said to have gravitated towards Sanwo-Olu.

MAKING OF THE CRISIS
It was learnt that though efforts were being made for reconciliation, it was gathered that the face-off worsened seriously on Monday after Ambode went to Abuja to collect the APC governorship form.

He was said to have obtained the form without a full reconciliation with Tinubu. After collecting the form, Ambode proceeded to make a public declaration at the Old Task Force Ground, Alausa, Ikeja, without the obvious presence of chieftains and leaders of the party.

The fact that the declaration was not done at the party headquarters at Acme Road, Ogba, in Lagos sent negative signals as to the possibility of his estrangement from the Tinubu mainstream in his re-election bid, a source said.

Few of the local government chairmen who attended the declaration left midway and some even left before the ceremony started at 4.00 p.m. on Monday. Before the declaration ceremony, chairman of the Lagos State chapter of the APC, Babatunde Balogun had held a closed-door meeting with all the 57 local government chairmen at the party’s Acme Road office before they later dispersed and shunned the governor’s declaration ceremony.

A confirmed source says party members are currently confused and are awaiting the declaration from the National Leader of the party.

AMBODE WEIGHING OPTIONS
Ambode yesterday summoned a closed-door meeting of some of his top associates at Lagos House, Alausa, Ikeja, in order to weigh the options for the governor.

The outcome of the meeting could not be deciphered as at press time yesterday.

Though the crux of the meeting was unknown, it was gathered that the governor was open to all options, including dumping the party for another or walking away to wait for another opportunity from the party.

The governor’s capacity to fight back within the party or outside, it emerged, had been limited by his strained relationship with the Lagos State House of Assembly.

There were reports from within the House that the governor had instigated a plot to remove the speaker of the House of Assembly, Mudashiru Obasa, a strong Tinubu loyalist. That plot quickly unravelled.

It was also learnt yesterday that a sizeable proportion of the members of the State House of Assembly attended a meeting at the party secretariat to discuss the development.

One of the sources, who spoke under anonymity with Vanguard, said the lawmakers have resolved to commence impeachment moves against Ambode as soon as they resume from the recess.

A member of the State House of Assembly estranged from the Tinubu mainstream who spoke on the condition of anonymity said yesterday:

“It could be a rumour, but the source I heard it from was an indication that it is nothing far from the truth.

“Although it was debunked, the people I heard it from were those I believed knew what they were saying. The people I spoke with gave it a possibility that, it is real. Asked, where the impeachment move is coming from, he said, “Unfortunately, it is coming from both the Lagos State House of Assembly and all the LCDAs.

According to another source, all the chairmen of APC in 20 LGAs and 37 LCDAs have signed the nomination form of Mr. Babajide Sanwo-Olu as an alternative choice.

GENESIS OF AMBODE’S TROUBLE
Ambode’s troubles with the political establishment in Lagos had for long been reported in political circles in the state.

A South-West governor close to Tinubu was said to have been at the forefront of the agitation to stop Ambode’s second term ambition.

Vice-President Yemi Osinbajo; Oba of Lagos, Oba Rilwan Akiolu, and Majority Leader of the House of Representatives, Hon. Femi Gbajabiamila, it was claimed had prevailed on the APC leader to support Ambode’s re-election plan.

At the centre of the allegations against Ambode was that the governor alienated the political mainstream in the state. Some others described the governor as heady with a capacity to decapitate Tinubu and his associates should he get a second term.

The issue of the PSP operators in the disposal of refuse was said to have been very touchy for the political elite, many of whom were entrenched in the PSP scheme as a way of servicing the political base.

Ambode, however, dismantled the scheme without as much appreciation of their role.

Even worse for the governor was the fact that the alternative arrangement made to replace the PSP operators have not done a good work, leading to mounting heaps refuse in the commercial capital of the country.

Party stalwarts had also complained that traditional acts of patronage that normally came the way of government did not come from Ambode.

However, Ambode it was claimed, decided not to patronise the political leaders on the premise that he had left politicking for Tinubu while he concentrated on the act of governance.

RUDE SHOCK
The face-off between Ambode and Tinubu came to the fore recently at a stakeholders’ meeting at the party’s secretariat, at Acme Road, Ogba, Lagos where Tinubu throughout the meeting failed to raise the hands or endorse a second term for Ambode which was a rude shock to members in attendance.

It was gathered that various support groups which had been created for Ambode’s re-election campaign had for some time been put on hold, pending final clearance from Tinubu.

FAILED EFFORTS
On different occasions, recently, some APC chieftains (names withheld) have confirmed that a number of political leaders and traditional rulers had impressed it on Tinubu not “to listen to those inciting him against Ambode.”

One of the chieftains who confided in Vanguard at the weekend, simply stated, “Ambode is at a crossroads” because all his supporters have backed off as all efforts to resolve the difference met a brick wall with Tinubu who insisted on a fresh candidate (kept to his heart) for the job.

Oba Akiolu was said to have tried to convince Tinubu to change his mind, but all proved abortive.

According to the chieftain, “It is only Tinubu and Ambode that can resolve the issues, not even President Muhammed Buhari. The issue is like that of a married couple having a family grudge.

No third party can really know the source of their fight let alone resolve it. The two, Tinubu and Ambode, must have a closed-door meeting without a third party to settle this current imbroglio. This is not about loyalty, it’s fundamental.”

APC KEEPS MUM
However, it was learnt that members of the State Executive Council have been jittery over the development, not knowing where the pendulum will swing in the 2019 governorship ticket.

Those with political aspirations were said to be worst hit as they could be shown the way out at any moment. Most of them have started making moves, meeting the party leadership and stakeholders for an endorsement from Tinubu and other decision-makers.

One of the aspirants who spoke to Vanguard on the basis of anonymity said: “The decision of the party to adopt direct primaries has caused panic in the fold of the aspirants in Lagos. We are left in the dark, and that is why some aspirants have put on hold their ambition and begun moves to get Tinubu’s endorsement.”

APC Risks A Crushing Defeat With Oshiomhole As Chairman

22 thoughts on “Revealed: Causes Of Ambodea��s Fallout With a�?JGodfather Tinubua�?, His Sins with The APC”