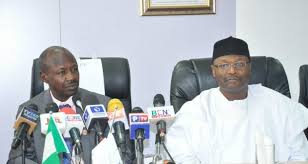 “INEC and EFCC should be there to preserve the integrity of the political process, including taking forward investigations without any prejudice on one side or the other, following the evidence and taking action where it is justified.” Mr. Paul Arkwright, British High Commissioner to Nigeria during his visit to the Acting Chairman of the EFCC.

Beyond any doubt, the basic tenets and cannons of democracy have all being desecrated by the Federal Government thereby making us shift vertically from constitutional democracy to a strange system of government that is beyond human comprehension. We have witnessed how democratic institutions are being continually and persistently destroyed by the Federal Government in satisfying the whims and caprices of some individuals at the expense of our hard-earned nascent democracy. It is so unfortunate that this same government that has turned the Judiciary to a toothless bulldog and a paper-head tiger has vowed to crush all democratic institutions thereby taking us back to a full-blown military regime which everyone of us have migrated from some 19years ago.

It is so embarrassing that the principles of separation of powers and the rule of law have been brazenly, openly and flagrantly trampled upon with so much impunity by the Presidency in their open assault against democracy.

In the interest of all, it is very urgent for everyone of us to rise to the similar challenge confronting the nation thereby subjecting us as a people to ridicule amongst the comity of nations. It need be realised that it is a duty we owe this generation and generations unborn to bequeath to them better days so that they won't see the present abnormalities as the norm. We must, as believers in the rule of law and constitutional democracy outrightly condemn assault on the institutions of our democracy as is being witnessed these days in restoring true democracy to the country.

Without an iota of doubt, our democracy have been desecrated with the government continued use of state's apparatus to combat and weaken opposition thereby sending a signal to the world that it cannot tolerate dissent, freedom of association and guarantee the fundamental rights of the people as enshrined in the Constitution which is the groundnum. However, I have come to the sad conclusion that this government does not take the security of lives and properties of the Nigerian people as the sole raison d'etre on which governance is built serious. As against the provision of Section 14, sub-section 2(a) of the 1999 Constitution which states that “sovereignty belongs to the people of Nigeria from whom government through this Constitution derives all its powers and authority;” the Economic and Financial Crime Commission which was established to tackle cases of fraud in high places but unfortunately has been turned to an instrument of oppression and repression in the hands of successive governments in Nigeria freezed the bank account of Benue State Government.

Nonetheless, this sudden change of event cannot be isolated from the recent political action that was taken by the Governor of the State, Samuel Ortom who recently decamped from the ruling All Progressive Congress (APC) to seek greener pastures in the Peoples' Democratic Party (PDP). His defection from the ruling APC came as a result of the deafening and criminal silence of the Presidency and the security agencies on the high-scale killings of helpless and harmless people of Benue State by Fulani vampires that have massively embarked on ethnic cleansing. But, it need be stated without fear of being contradicted that freezing the bank accounts of the State Government without a court order is tantamount to withholding the revenue of the State which poses a very dangerous threat on our democracy. The recent action taken by the EFCC would, no doubt, deny the people of Benue State access to good governance which would, but, only subject them to undue hardship especially at a time when the State Government need money to wage a decisive and an ending war against the Fulani vampires.

It cannot be gainsaid that the Economic and Financial Crime Commission which is expected to act within the ambiance of the law have decided to be an institution on their own by acting against the provisions of the law in freezing the bank accounts of Benue State Government. It appears to me that nowhere in the Constitution is the EFCC or any other agency expressly or impliedly authorise to freeze the account of a State Government. In fact, Sections 128 and 129 of the Constitution only empower the State House of Assembly to look into such issue after a Committee must have been set up and one can easily conclude that the singular act of the EFCC is not in tandem with the provision of Section 1(1) of the Constitution.

In all, it is my utmost believe that the State Government would challenge this illegality in a court of law in curbing this show of force by the agency of the Presidency.

Kazeem Olalekan Israel (GANI) is a 300Level Political Science Student of Obafemi Awolowo University. He writes from Ile-Ife. He can be reached via [email protected]

Re: Consequences of Corruption.

11 thoughts on “Rising Impunity; An Impediment On Our Democracy”