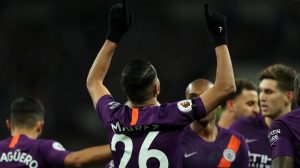 Manchester City moved to the top of the English Premier League table after defeating Tottenham Hotspur 1-0, with Riyad Mahrez scoring the decisive goal.

Liverpool’s comfortable win over Cardiff City on Saturday had seen the Reds move to the summit of the log, but the Citizens are now back in charge courtesy of their record signing’s early strike against Mauricio Pochettino’s side on Monday evening.

Six minutes into the clash, Mahrez swept home the opener from a Raheem Sterling cutback, after the England winger benefitted from Kieran Trippier’s sloppy defending

The former Leicester City winger came close to doubling City’s lead but his effort forced a smart save from Hugo Lloris.

The visitors took the lead into the break and after the restart, they continued their dominance with majority of the game played in Spurs’ half, but were unable to leverage on it.

In the end, it was Mahrez’s fourth league goal of the season that made the difference.

The 27-year-old – who was taken off in stoppage time – has now scored five goals in 15 games across all competition and will hope to add to that tally when City square up with Fulham in Thursday’s League Cup encounter.

Ex-NFL star not guilty of murders