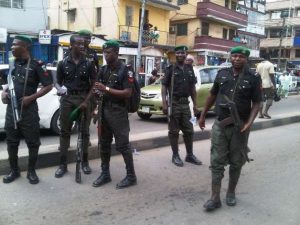 The All Progressives Congress (APC) national secretariat was thrown into a panic in the early hours of Monday when two suspected robbers struck at the party secretariat on Blantyre Street, Wuse II, Abuja.

Luck, however, ran out of them while attempting to cart away two air conditioners.

One of the police officers on duty told journalists in confidence that he heard a noise and decided to check through the back of the building, explaining further that the robbers gained entrance into the compound, scaling the fence after cutting the barbwire about 2:30am. “On getting there, I thought it was my colleague until I shouted his name and he answered from the main building. I didn't know that the person I was seeing kneeling down was one of the robbers. The robbers had already removed one of the air conditions, placed it on top of the fence for easy transfer to their waiting vehicle while the second one was nearly done with before we descended on them.”

A chieftain of the party who pleaded anonymity said that he and other concerned party members had complained to no end of lack of adequate security light in and around the party house, stressing: “The kind of darkness that envelops the secretariat at night is better imagined.”

While confirming the incident, the FCT Commissioner of Police, Bala Ciroma, said that the arrested culprits were in their custody, emphasising: “Arrest has been made, an investigation is going on.”

Jonathan was too small for the Presidency: Obasanjo