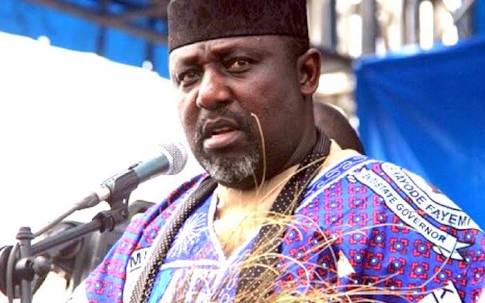 The Governor of Imo State seems not to understand anymore the distress language of Imo citizens, APC members in the State and the collective welfare of the party, and the pains of victims of his demolitions and motor painting policy, hence, no Nigerian language may draw his attention to the plights. And as such we cry out with the European languages that he visits always and understands.

Every society, language and race, has specific manners for cautionary gests and remarks. In the Western world, especially in the daughters of Latin, for the cautionary declaration a�?what are you doing,a�� the Italians ask a�?che stai facendo?a�? or a�?che cosa fai?a�? The Spaniards ask a�?Que esta haciendo?a�? The Portuguese ask, a�?Que estas a fazer?a�? The French ask a�?Que faites-vous?a�? All these come with a unique gesture of a bouncing palm, glued together in straight fingers. Its aim is heuristic and for self correction. It is similar to the question Christ in apparition asked the fleeing Peter in ancient Rome, a�?Petrus, Quo Vadis?a�?

When you watch the dramatized version of Henryk Sienkiewieza��s novel, which is acted on stage as Quo Vadis (Where Are You Going?), your attentions will never digress from the story of the trial and persecution of the early Christians titled after the question Christ in apparition asked the fugitive-Peter in the early-Christian-era-Rome, Quo Vadis (Where Are You Going) abandoning my flock? I have watched it severally and my attentions never digressed from the story and all my reflections centred on the crises, trials and tribulations the early Christians witnessed in the then hostile Roman Empire, the summation of which irked Peter (the Churcha��s(Rock) to abandon the flock. It would be recalled that decades back, before the Quo Vadis interpolation, the same Christ in apparition had twice asked a�?Simon Peter, son of Jonas, do you love me more than these?a��; twice Peter answered yes; twice Christ ordered him- a�?feed my lambs.a�� The third time of that prophetic questioning, Christ said: a�?feed my sheepa��, etc.

Like a�?what are you doing,a�� the interrogation Quo Vadis? (Ou vas-tu ? Dove vai ? I jee ebee? Where are you going?, etc., in whichever language you may wish) has certain nuances. It could be a prohibition (order) or a reinvigoration of moral consciousness, or a reproach on irresponsibility, or a mockery and reproof targeted for self-realization, etc. In any of these cases, the question implies a mobile subject, a departed or an abandoned place (thing or subject), a new direction (focused or serendipitous) or a straying intention. What the Christ in apparition asked the mobile Peter was all encompassing of several significances; none knows the best or main meaning except God. Yet the effect was that Peter turned back and returned to where he intended quitting for a greener pasture, and thus meet with destiny and fulfilled Goda��s plan and economy of salvation. And this same effect is the target of this similar interpolation to the amiable Imo Governor, Rochas Okorocha, Che cosa fai?

The situation in the Ancient Rome during Petera��s time could be likened to what happens in Imo State today, though circumstantially political than religious but of same substance as there is an abandonment, an indifference, an on-the-fence, a leaving-you-here for a greener pasture, safer and more self-actualizing environment by the shepherd of the flock who received the mandate to care for them. The I has become more important that the we. Che stai facendo?

Governor Rochas Okorochaa��s recent silence and insentient disposition to Imolitesa�� plights over the recent transport sectora��s punishment in the State (the lack of vehicles and versatile parks for travellers, as well as the unending 24 hours gridlock at the Irete), does not look like what he does? Could it be called wisdom (as silence is golden), or consent (as the British legal luminary, Sir Thomas More, said qui tacet consentire– silence gives consent?), was it observable weakness from his own administrative angle as William Shakespeare (Romeo and Juliet) said, a�?the weakest goes to the wall.a��

Obviously, man as a creature loves self actualization or blossoming and thus constantly stirs its directions toward greener pastures and self actualizing chances and states, but not when one is the head of a family or a herd. This could be alluded to the extremist mentality of some politicians in Africa, in Nigeria and in Imo State in particular, to move from one political party to another, to move from a party general vision to personal, to derail as a father of the house against his amiable sons. These have resulted to multiple defections of some APC chieftains to other parties. Some are really in their course of searching for greener pasture while others are revolutionarily motivated- Greed and vengeance. Others are because of frustrations by some party hijackers or as a result of their own lack of patience and foresight; some because they want to be relevant in every dispensation and the rest have some relative but unique motivations. Yet all are games of interest, which differ according to human intentionality, dispositions, personality types, self-conception, aspirations and motivating forces.

Whatever is the case, the shepherd is the chief guardian of the flock, his greatest interests, and focuses, dispositions and valuing are flock-centred, purely altruistic and focused. Under no condition or circumstance does a good shepherd watch, hear, behold and witness his flock in crisis and abandon it conscientiously or not, in search of personal interest. Here, one wonders if Imo State still has a shepherd (good or bad,I dona��t care much) as it used to. Many sheep in the flock are in pure insecurity states, many angles of the flock-rearing are embattled by wolves, many at the centre are swallowed alive by the boa constrictor, many of them are strangled by the greater beasts (the ram-like ones: Lions), etc. The good shepherd should wake up always and be at alert, always near the flock; not on regular expulsions, denouncements and vacations when the flock is in crisis. He should wake up and stop sleeping, dreaming and abandoning the flock for mobility reasons, in search of private auspicious tomorrow, higher levels and private greener pastures. Que esta haciendo?

The recent crisis in Imo APC today needs not only to ask Rochas, a�?quo vadisa�� but also a�?che cosa faia�� (and with the accompanying gests of the palm and fist). What is he doing? Is it for the good and wellbeing of the party or is it for the good and wellbeing of some secluded few, or is it for the wellbeing of his immediate family? The party has witnessed series of rancour in forms of adoptions, then came the endorsement madness, then rampart suspensions of party members, multifaceted party executive listsa�� flight to Abuja, denouncement of party members who engaged in intra-party camps activities as antiparty, the corporate frustrations of some elective office seekers to abandon their original instinct and call to service for another alternate elective office, etc. Que estas a fazer?

More than 60% of APC delegates are stranded, because of these happenings they now display overt aversions either for Rochas or Araraume, and some have such aversions for both. At present, they are stranded. Where will they head to? Araraume seems none accommodating like Rochas. Rochas has drastically changed from the loving peoplea��s Governor they used to know and enjoy. Given media reports, the former all-loving Governor has no cordial relationships with the gubernatorial aspirants in the party who are against the choice of his son-in-law, Uche Nwosu, as anointed candidate of APC for 2019 general elections. Among the 7 serious and prominent APC aspirants, the print media relay severed relationships with Prince Eze Madumere, Sir Jude Ejiogu, and Engr Chuks Ololo. It is also reported that Rochas has endorsed Emma Ojinere for Owerri zone senate and Rt. Hon Acho Ihim for Okigwe senate, and all these are governorship aspirants in the party. He has constant verbal wars with Senator Ifeanyi Araraume. So far only the former OCDA chairman, Barr Chima Anozie remains the governorship aspirant in Imo APC that does not fight Rochas or Araraume and whom the Governor has not displayed any aversion for.

Given these, Imo APC delegates and party members are at cross roads, where do they go from where? The only APC gubernatorial aspirant that is untouched in these crises and remains focused, stable and balanced for the elective post is perhaps Barr Chima Anozie whom as news go around, is called a�?Home Base.a�� What is heard is that he is a good, well-experienced, and cultured politician and peace loving APC governorship aspirant from Owerri North LGA. Could he salvage Imo APC from the impending doom? But these also need to verify that he is not sponsored by either Rochas (Uche Nwosu) or Araraume, if not, Imo APC will have the ugliest outing during the governorship primary. And given the present situation, his choice (Barr Chima Anozie) is perhaps what needs to be considered and supported by all in preparation for a healthy primary for the governorship seat election few months ahead, if Governor Okorocha will not do Imo APC what his brother Udenwa did Imo PDP at his exit. Que faites-vous?

APC delegates state-wide want focus, want to pitch their tents in one angle where there is safety. But tracing this remaining APC governorship aspirant, would they not face sanctions of antiparty, since intra-party APC camps politics have turned to antiparty in the State? As this month of April ends, the larger opinion of Imo APC delegates is that their two apex leaders, Rochas and Araraume should retrace their steps and go for the unity of the party or show them where to pitch their tent. The degree of abandonment, indifference and selfish that abound in the present politics of Imo APC, necessitate that one asks Rochas, what he is doing to the party, Imo State and the future of Imo democracy. Rochas, che cosa fai? Quo vadis

The 2019 Elections In Nigeria And The Igbo Dignity

Plot to Oust Buhari:  Vultures are Gathering over Murder of CAN Chairman