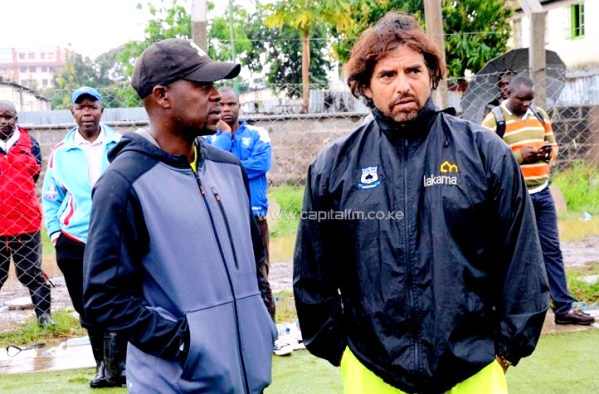 Argentina Rodolfo Zapata becomes coach number 14 for AFC Leopards in four years and just like his 13 predecessors, he has arrived preaching the same gospel of breaking the long wait for the cluba��s 14th Kenyan Premier League title.

AFC Leopards last won the league in 1998 and they have come close on several occasions, but they are yet to hit the right notes.

Speaking to Capital Sport, the tactician believes that AFC has the right quality to vie for this seasona��s league title despite being seven points behind leaders Gor Mahia with two more matches played.

a�?The league is still open and step by step, we need to continue working hard because I believe we are in the right way. We need to correct some details, improve in a lot of aspects and that is my job”, Zapata added.

“I accepted the challenge because I saw the quality players we have and I think we stand a chance, but we need to go step by step. I have watched some of the games and the first problem I noticed is that we concede a lot of goals. I will need to analyze why that happens and then get a solution. I am sure we will be a great team and hard to beat,a�? the Argentinian tactician said.

Zapata, previously with Botswanaa��s Gaborone United arrived in the country last Friday. a�?I came here because this is one of the biggest teams in Africa. I have seen some of their games this season, and I saw that we do something big,a�? he added.

He has also admitted that the Kenyan Premier league is very competitive having watched a few league matches over the weekend. a�?Everyone wants to win and the pressure is always there. But the secret is to always play better than the opponent, and that is what we will embark to do,a�? Rolo Zapata said.

His first match in charge will be a baptism of fire when he faces Gor Mahia in the Hull City challenge play-off on Labor Day in Nakuru.

Freo giant gears up for one more year