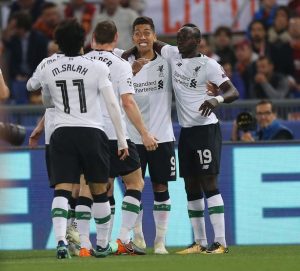 Liverpool set up a repeat of their 1981 meeting against Real Madrid despite a first Champions League defeat of the season at the Stadio Olimpico.

A chaotic 4-2 semi-final second leg loss to Roma saw Liverpool progress 7-6 on aggregate, with victory secured thanks to Sadio Manea��s 19th of the season and the rare sight of Georginio Wijnalduma��s first away goal in almost three years.

A fortuitous own goal by James Milner in between had put the hosts back in the game, while Edin Dzekoa��s strike shortly after half-time ensured the Reds endured a testing conclusion and two late goals for Radja Nainngolan a�� including a penalty with the last kick of the game a�� came too late for Roma.

But Liverpool move on from defeating the same opponents against whom they won their fourth European Cup a�� in this very stadium in 1984 a�� to facing the club they beat 37 years ago for their third.

Given the way they have taken teams apart in this competition a sixth triumph in Kiev is a realistic possibility, although whether their defending can cope against reigning champions who have won three of the last four titles is open to question.

Jurgen Kloppa��s side are smashing all kinds of records this season and another one fell as they reached 46 goals in 14 Champions League matches (including qualifiers), eclipsing the previous best set by Barcelona (in 16 games) in 1999-2000.

A great deal of that is owed to their formidable front three of Mohamed Salah (10), Roberto Firmino (10) and Sadio Mane (nine), now the highest scoring club trio in a single Champions League season after overtaking Real Madrida��s Cristiano Ronaldo, Gareth Bale and Karim Benzema, who scored 28 in 2013-14.

They are the fastest to 40 (12 matches) in a single campaign in the competition proper.

It was Manea��s turn to star on the night Liverpool booked their first Champions League final place in 11 years and their eighth in the competition.

Having survived a scare when Alessandro Florenzi fired a long-range shot just wide Mane, who had an early penalty claim waved away after Kostas Manolasa�� challenge, struck the first blow which severely damaged Romaa��s hopes of clawing back a 5-2 first-leg deficit.

Naingollan squandered possession in midfield and Jordan Henderson fed Firmino, who teed up his team-mate for a smart left-footed finish: the first goal conceded by Roma at home in the Champions League this season as Liverpool maintained their record of scoring in every away fixture.

That left the hosts requiring four in 81 minutes and they were handed a lifeline when Dejan Lovren, under pressure from Patrik Schick, hacked the ball straight at Milnera��s head and rebounded past goalkeeper Loris Karius.

Liverpool wobbled and Roma sensed their chance but that was taken away from them by a second away goal, cancelling out the only slight advantage the Serie A side had coming into the tie, in the 25th minute.

Alisson turned Manea��s shot for a corner after Andrew Robertsona��s driving 35-yard run to the byline to provide Wijnaldum with his big moment, heading in his first away goal in 1,081 days since he found the net for PSV Eindhoven against Den Haag in May 2015 and his first for an English club in 64 away games.

It sent the 5,000 travelling fans, who had to deal with long queues to get in but apparently none of the pre-match security concerns, into raptures.

Stephan El Shaarawy offered Roma hope as he had a shot deflected off Milner and onto the post and a penalty shout against Trent Alexander-Arnold turned down but when Dzeko fired home a badly-directed punch from Karius, Roma required three in 38 minutes to force extra-time.

Alexander-Arnold appeared to get away with a handball against El Shaarawy but Liverpool were hanging on even before Nainggolana��s 86th-minute drilled effort off the post set nerves jangling, with the midfielder converting a penalty after substitute Ragnar Klavana��s handball.

MOURINHO TO POGBA: You Will Never Captain Man.U Again While I Remain In Charge