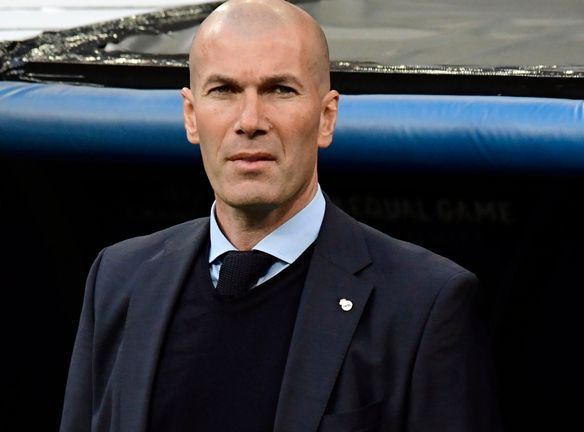 Real Madrid Coach, Zinedine Zidane has revealed that Cristiano Ronaldo will be fit for the Uefa Champions League Final against Liverpool in Kyiv.

Ronaldo couldn't continue the second half of the clash against Barcelona on Sunday after hurting his Ankle, but Zidane has confirmed that Portuguese Captain is walking and he will be fit and ready for the Champions League Final

Ronaldo has scored 15 goals in the Uefa Champions League this season, the highest in the Competition.

Zidane said during the press-conference as the Los merengues prepare to face struggling Sevilla in the La Liga.

“What's incredible is that he (Ronaldo) is walking after 48 hours and it shows his ambition, but I don't know if he'll be available for Villarreal,” the coach revealed.”Everyone [including Dani Carvajal and Isco] will be available for the [Champions League] final, I'm telling you, 150%.

“Ronaldo may only be able to return for the Champions League final but Zidane said he would not hold back players for the game in Kiev.”I don't think like that, about injuries and what could happen before the final,” he insisted.

“I have 25 players and some have to rest, but not thinking that they will get injured, if not then we wouldn't play what we have left.”We have to be positive when there are injuries like Cristiano we think about recovering as soon as possible.

“As a coach, I have to play the games and I will pick the teams I see as convenient.

“It also comes after several days of intense controversy following Sunday evening's Clasico, marred by comments on and off the pitch and heated challenges as well as refereeing mistakes.”

I think that many things happen on the pitch, the problem is that now you know everything,” he explained.

.”For now, though, Zidane has all eyes set on Sevilla, who will be led by new coach Joaquin Caparros who led them to victory last weekend.

“I'm sure that they'll go all out, this coach has a high intensity, a pressure,” he analysed.”I saw the game against Real Sociedad and they pushed them to the max, a good game awaits us.

.”It will be a spectacular game, open and with chances for both teams,” he said looking forward to the tie.

“What matters most for us is planning, showing up and making things difficult for them.”It's a final and it will be very intense.”You know the team well, we will find a side that in are the final, we know what they have, a bit of everything, physical, technical, speed…

“They're English and they defend and they fight, they know what they're doing

Zidane has also played down suggestions that Mohammed Salah will slug it out with Christiano Ronaldo for the Ballon d'Or Award.

.”One aspect that many were keen to push the coach on was the pitting of two of Europe's biggest superstars up against each other in Mohamed Salah and Cristiano Ronaldo

.”I don't know if [Mohamed] Salah will be in contention for the Ballon d'Or, but he's had a great season,” he said

.”The game won't be Cristiano against Salah, it will be Real Madrid against Liverpool.”