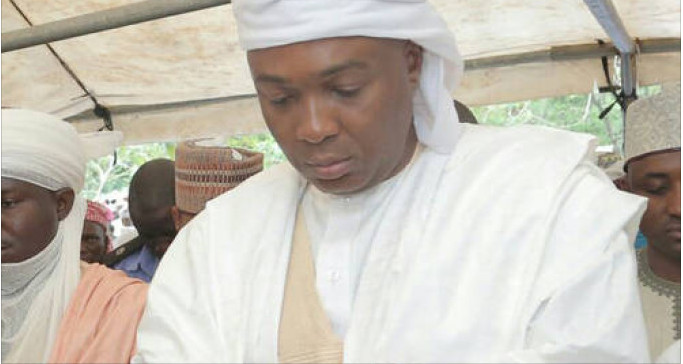 The Ojude Oba might have come and gone but certain events would linger in the mind of many for months to come. The 2018 edition will go down in history as the day the Senate President, Bukola Saraki, chose to make a daring statement about his bold presidential ambition in the domain of one of his staunchest supporters of President Muhammadu Buhari, Governor Ibikunle Amosun.

And to cap Saraki’s in-your-face heroic stunt at the very popular festival, the royal support of one of the most influential traditional rulers in Africa, the Paramount King of Ijebuland, His Royal Majesty, The Awujale, Oba Sikiru Adetona, was in blatant display. Not only did the Awujale extend invitation to Saraki; the king ensured that Saraki’s presence as Special Guest of Honour was as grand as they come while the incumbent governor was nowhere to be found.

The handwriting of Saraki’s imminent exploits at the festival could be decipherably read on the wall when the organising committee of Ojude Oba 2018, floated a press conference where Saraki was announced to have been specially invited by the Oba Adetona himself. Not that there was anything spectacular about his invitation but no sooner had the news of Saraki’s invitation hit the headlines than people began to read different interpretations to it. According to a group of critics, the Ojude Oba festival has become so big that men and women of immense means and global clout grace the event annually but their invitation and attendance were hardly given the type of media frenzy and publicity Saraki’s was.

Saraki invitation coupled with grand reception accorded him and very warm camaraderie displayed between him and the paramount ruler at the festival spoke volume of where the pendulum of the Awujale’s support is likely to swing in 2019. The conspicuous absence of Governor Ibikunle Amosun, who has been the host governor of political bigwigs to the festival for several years, is also lending credence to insinuation that things might not be looking good between him and the Awujale.

According to unconfirmed reports, Amosun made frantic but futile attempts to get Oba Adetona to withdraw Saraki’s invitation because of the political treasure the Senate President would tap from such invitation. The king was said to have rebuffed the attempts and drawn the governor to past events when many bigwigs of the All Peoples Congress (APC) were invited. He was said to have rejected all attempts to make Ojude Oba a political event.

Saraki’s presidential aspiration has further charged the political climate while his influence is fast growing and exponentially too in the South West where many are doubtful of his electability credentials. How far this would translate to electoral fortune for the recently decamped former Governor of Kwara State will be witnessed at his party, the Peoples Democratic Party’s primary which will parade other political juggernauts, and perhaps, in February 2019 when the general elections take place, that is if he gets to fly the PDP flag.

8 thoughts on “Royal Endorsement! How Awujale Made Saraki Superstar In Amosun’s Domain”