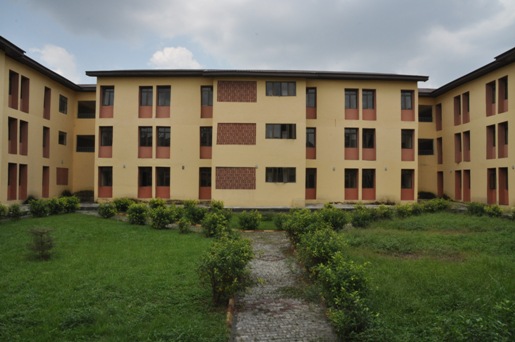 The Rivers State University of Science and Technology ( RSUST ) authority and students, have lauded the Niger Delta Development Commission ( NDDC ) for the donating an ultra-modern 522-bed hostel worth N1.230 billion to female students of the institution.

The three-storey state-of-the-art hostel accommodation built for female students has continued to generate encomium nearly two years after it was inaugurated.

Some of the students, parents and university management made this known on Tuesday, saying that the hostel had eased accommodation deficit in the university campus.

The respondents added that the complex has drastically lessened hardship and unnecessary exposures of students to shylock landlords and reckless life outside the campus.

Ms Kate Brown, a 400-level student of Chemical Petroleum Department, said that she had squatted with six other students outside campus before NDDC prototype hostel came on stream.

She said due to acute shortage of bed spaces in the past that many students were forced to seek male partners outside campus while some moved in with their “Aristo” lovers.

“Before now, hostel accommodation in the campus could be likened to a prison. The living condition was extremely uncomfortable and not suitable for learning.

��We struggled with poor ventilation and poor toiletry system that exposed us to contagious infection. But thanks to NDDC all that has changed now with the prototype hostel,” she said.

A 300-level student, Boma Fynface, said the inability of school management to tackle the accommodation deficit head-on by building additional hostels had been a source of concern.

“NDDC hostel has really ameliorated the sufferings of students. But NDDC alone cannot provide the entire accommodation infrastructure that is needed to improve living condition of student.

“The state government, university management and private companies should come to our aide by replicating the NDDC hostel in the campus,” he said.

President of the Student Union Government (SUG), Mr Bestman Azuonwu, said that the hostel has reduced cases of rape of female students who before now resided outside campus.

The unionist said the hostel has been helpful to the student community and parents who paid exorbitant funds to secure accommodation for their children and wards outside campus.

“We also want NDDC to build another hostel for male students and assist us to complete walkways from Faculty of Engineering to Faculty of Sciences,” he said.

Also speaking, Dr Gregory Ademola, a lawyer and father of two students, said that there was need for government to address accommodation challenges on campuses across the country.

He said that most hostels on campuses were known to be terribly bad, insanitary, congested and overcrowded which impeded the capability of students to learn effectively.

“These realities made me to rent a self-contain apartment for my two daughters outside campus; I paid N190, 000 rent per annum, including transportation – which wasn’t easy.

“I had no choice other than to move them due to difficulties to secure accommodation and unhygienic condition of the old hostels.

“But, immediately NDDC hostel came on board; I quickly relocated them to the hostel; this intervention by NDDC is truly commendable,” he said.

Dr Isaac Obipi, the Dean Student Affairs of the University, said the hostel has had immense impact on campus and was currently accommodating 672 female students.

He said the university management was particularly impressed that the hostel was built for female students whose need for lodging was rather peculiar compared to their male counterpart.

According to him, male students could operate from long distances or from their homes as their exposure to security risk is considerably less compared to that of the female student.

“So, the hostel accommodation has been of tremendous help not only to the students; the entire university community but has giving the university an architectural facelift.

“There is now privacy as four to five rooms in a section share one convenience as opposed to the old hostels where a whole floor share fewer toilets and bathroom,” he said.

Obipi said, however, that some of the reticulation and water facilities have fallen apart, faulting the competence of the contractor.

He urged the commission to build more hostels and laboratories for students; sponsor researches and endower professional chairs for research and application of research findings in the university.

The project awarded in 2004 at the initial contract cost of N427 million, was later reviewed upwards by the commission to N1.230 billion.