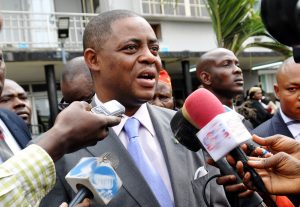 On 6th February 2014 the leader of IPOB and the lion of the East, my friend and brother Mazi Nnamdi Kanu, said the following, “As they campaign vigorously for elections, you would think, they are coming to grow the economy, enthrone justice, breed unity and tolerance, love for one another.

No, they are coming to elevate Hausa-Fulani supremacy, to reposition the security agencies by sacking all competent hands and replace them with their kinsmen to drive their ethnic domination of the Biafrans, the Fulani herdsmen will be armed and encouraged to slaughter us with impunity, and their masters will protect them. They are coming to ensure that my people are enslaved forever.

Those who do not, believe me, will soon see it happen before their eyes.”There is no gainsaying that he has been proved right. On 2nd December 2014, he went further by saying, “Then a group deadlier than Boko Haram will emerge, they will seize our farmland, rape our women, kill our people and their master will protect, defend and even arm them because their sole agenda is to enslave us forever. Those who cannot see it now will soon see it. The hatred in their souls for my people is legendary. They do not see us as humans. They kill, they slaughter, they burn and they destroy. Mindless bloodletting is in their DNA. My people are in trouble”.Five years later every word that Nnamdi has uttered in this prophecy has come to pass. Love him or hate him can anyone doubt the fact that God spoke through him on at least these two occasions?

Nigeria has become the biggest shithole on the African continent. We are like an open public toilet that has never been flushed. Everything about our country stinks!

They say they want to establish Ruga settlements all over the country for the Fulani and their cows. Is cattle business Government business?

Cows were made for men, men were not made for cows. Cow-love is unnatural and bestial. For a man to view a cow as a woman and feel aroused by it is sickness.

They cannot push a nation to the brink of war simply because of their inexplicable and disgusting attraction to a mooing cow and their inordinate ambition and insatiable desire to conquer others.

They cannot use their cows and herdsmen from hell to cut us short and mow us down like the winter wheat and the summer grass.

They have taken everything from us: our nation, our dignity, our identity, our future, our self-respect, our destiny, our lives, our liberty, our faith, our hope, our resources, our substance and so much more. And now they want to take away our land!

Well, I have news for them: this will not happen without a fight! It can only happen over our dead bodies! They have removed the gloves and they are brazenly baring their fangs.

Ours is a government of the Fulani, by the Fulani and for the Fulani. Ours is not a nation but a conquered, occupied and subjugated vassal state which was specifically and cleverly crafted and forged for the benefit and advantage of the Fulani, their stooges and their cows.

This is self-evident. It is an incontrovertible and indisputable fact. And it raises a number of fundamental questions about our supposed unity and so-called nationhood.

We are constrained to ask: are we really one nation? Were we EVER one nation?

Chief Obafemi Awolowo, the Premier of the old Western Region of Nigeria and the erstwhile Leader of the Yoruba, raised this question in his famous book titled “Paths To Nigerian Freedom” as far back as 1947 and his answer was a resounding “no”.

He made the point that there was as much difference between a Turk and a German as there was between a Fulani and an Igbo. 72 years later, I have to say that I agree with him. It is one of the greatest ironies of our history that the same Awolowo that wrote that brilliant book and that displayed such remarkable, unprecedented and prophetic insight about the nature and future of our union was a major player in the savage and cruel war that was waged and brutal genocide that was unleashed against the innocent civilian population of Biafra in the name of keeping Nigeria one.

This contradiction in Awolowo’s otherwise great and extraordinary legacy of excellence, principle and patriotism is something that I have never been able to comprehend or understand.

Nigeria is not one nation and I do not believe that we ever were. We were just pretending and lying to one another: publicly professing love but secretly hating.

Whichever way you see it the following deeply profound and philosophical questions must be answered.

What does a compassionate, gentle, refined, beautiful, reticent and kind-hearted bird like the flamingo have in common with an aggressive, repugnant, violent, greedy, loud, flesh-eating, ugly winged-beast and bestial creature like a crow.

What does the noble, courageous and regal eagle have in common with a heartless chicken, a singing partridge, a humming pigeon, a red robin, a caged and chirping budgerigar or a cuckoo out of hell?

What do the refined, the civilised, the educated and the noble have in common with the ignorant, the bloodthirsty, the savage and the blood-lusting barbarian who hail from another world and from another century?

What do the children of the Most High God have in common with the sons and daughters of perdition and the seed of Satan?

Those that continue to insist on “one Nigeria” must answer these questions and rid themselves of their sadistic disposition, masochistic fantasies and destructive delusions.

The truth is that “one Nigeria” died long ago but the Fulanisation and Islamisation gambit of General Muhammadu Buhari has finally buried her and put a nail in her coffin.

The Truth About The Supreme Court Judgement On Imo Guber Election

Why Lagos Cannot Eject The Igbos

8 thoughts on “Ruga And The Fulani Agenda, By Fani-kayode”