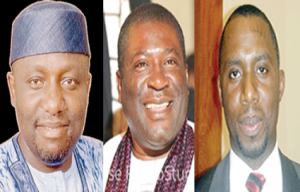 Real crisis of confidence appears to be brewing in Imo State Chapter of All progressives Congress following the endorsement  chief Uche Nwosu, Chief of Staff to the Imo  State Government by Governor Rochas Okorocha as the person he would support to succeed him.

The announcement has sparked a deluge of reactions from across the state, with many wondering how the governor could settle for Nwosu just because he is married to  his 9governora��s) daughter.

Reports from the state indicate that the party has not accepted the decision, which they believe may cost the state the governorship seat if not properly handled.

According to sources, the governor had for long prevaricated over his choice of a candidate that would stand on the platform of the APC in the 2-0`19 governorship election. It was learnt that though it was clear he would eventually settle for his son-in-law, he had encouraged his deputy Mr. Eze Madumere, that he would be his choice.

They were said to have  on Tuesday angrily stormed out of a meeting organised by the Special Adviser to Governor  Okorocha on Youth Affairs, Kenneth Emelu at the Imo Youth Centre to lobby for their support for the governora��s anointed successor.

Addressing a press conference shortly at the Imo  Concord Hotel, the State commander, AV, comrade Ibeawuchi Nwannaeri who spoke on behalf of the groups said that APC would only support a candidate who emerges through a credible party primary, irrespective of the zone .

Although, Nwannaeri described Nwosu endorsed by Governor Okorocha as  a good candidate for the position but maintained that the partya��s interest should be paramount.

a�?We dona��t want to make mistakes, youths of Imo does not support endorsement of an individual , Nwosu is a youth and a good man ,but the interest of the party should be paramount, no matter what, be it Madumere, Nwosu, Ololo or Ejiogu, what we are saying is that they should emerge through the party primarya�? Nwannaeri said.

Similarly, a stakeholder of the party, and a former Commissioner for Information , chief Vitalis Ajumbe while reacting to the endorsement by Governor Okorocha said that their is nothing wrong for the governor to endorse any candidate, but noted that he has no right to determine who becomes his successor in 2019.

a�?If he thinks endorsing his son -in-law would make him the governor, he is deceiving himself ,it only shows that Okorocha wants to come back for a third term through the back doora�? Ajumbe said.

Trouble of high magnitude broke out when the youths demanded their share of N10 million from Hon. Emelu allegedly budgeted to secure youthsa�� endorsements only to receive paltry N1, 500 each. The angry youths reached for their pound of flesh from the profusely sweating Emelu but for the timely intervention of security agents.

Meanwhile, no fewer than ten APC youths sustained various degrees of injuries as majority of aggrieved ones totally rejected Governor Okorochaa��s son-in-law describing him as arrogant, misfit and money-miss-road who knows nothing about governance other than fun seeking.

APC To PDP: Your Letter To UN Beyond Comprehension