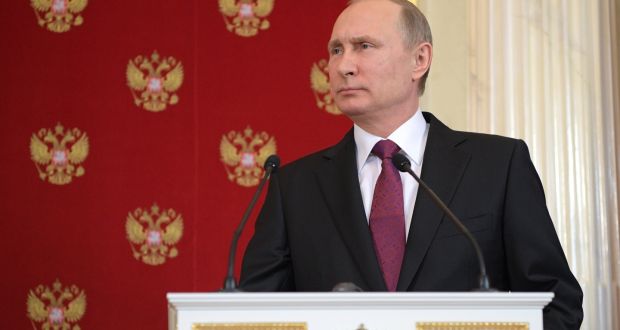 Russia and the United States traded jibes again on Tuesday over the poison gas attack in Syria on April 4th as US secretary of state Rex Tillerson arrived in Moscow amid escalating tensions between the two cold war adversaries.

Russia’s president Vladimir Putin described the chemical attack in Idlib province as a “provocation” by opponents of the Damascus government seeking to entice the United States into the war in Syria, and he predicted that further such attacks were imminent.

The US and its western allies have blamed the attack, in which at least 86 were killed, on the regime of Syrian president Bashar al-Assad, and also criticised Russia – an ally of the Syrian regime – for not doing enough to prevent it.

“Similar provocations – and I can’t call it anything other than that – are being prepared in other parts of Syria, including in the southern Damascus suburbs, where they are planning to again plant some substance and accuse the Syrian authorities of using it,” he said.

Mr Putin was speaking in Moscow while standing beside the visiting Italian president Sergio Mattarella.

The White House hit back at Moscow’s allegations, accusing the Kremlin of disseminating misinformation. A senior White House official said there was “clear and consistent” information that Syrian aircraft had launched the aerial attacks at about 6.55 local time on April 4th in the Syrian town of Khan Shikhoun, adding that indications were that sarin gas had been used.

Mr Tillerson arrived in Moscow on Tuesday evening at a low-point in relations between the two powers, with the US accusing Russia of some level of complicity in the chemical attacks, which prompted US president Donald Trump to order missile strikes on the Shayran air field in western Syria late last week.

The secretary of state reiterated on Tuesday that Syrian president Bashar al-Assad must go, echoing the position of the Obama government, but confirming a change in policy by the Trump administration, which had previously suggested that Mr Assad’s leadership was a “political reality”.

Speaking before he boarded a flight to Moscow, Mr Tillerson said that Mr Assad’s leadership was “coming to an end”, adding: “We hope that the Russian government concludes that they have aligned themselves with an unreliable partner in Bashar Al-Assad.”

He said Russia had failed to live up to its commitments to guarantee that Syria would dispose of its chemical weapons under a 2013 agreement. “It is unclear whether Russia failed to take this obligation seriously and whether Russia has been incompetent. But this distinction doesn’t much matter to the dead. We can’t let this happen again.”

He also reiterated the US’s insistence that its focus was on defeating the Islamic State terror group, also known as Isis.

“We do not want the regime’s uncontrolled stockpile of chemical weapons to fall into the hands of Isis or other terrorist groups who could and want to attack the United States or our allies,” he said. “Nor can we accept the normalisation of the use of chemical weapons by other actors or countries in Syria or elsewhere.”

Mr Tillerson flew to Moscow from Italy where G7 foreign ministers failed to agree to impose further sanctions on Syria and Russia over the chemical attack, despite calls from British foreign secretary Boris Johnson to do so.

Instead, the group of seven countries – the United States, Canada, Japan, Italy, Britain, France and Germany – issued a communique calling for a “credible political transition in Syria” and urging Moscow to “promote a real and genuine political process” in the war-torn country.

Mr Trump declined to answer questions on Russia as he met with business leaders and chief executives at an event in Washington on Tuesday. The US president has yet to specifically reference Russia in his statements on the Syrian conflict, in contrast to Mr Tillerson and UN ambassador Nikki Haley who have urged Russia to reassess its support for the Syrian regime.