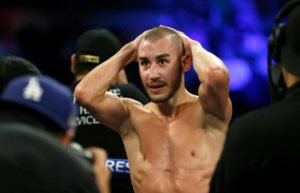 Moscow (AFP) – Russian boxer Maxim Dadashev has died from injuries sustained in a fight in Maryland, the Russian boxing federation announced on Tuesday.

“Maxim Dadashev has died in the United States following injuries sustained during his fight with Subriel Matias,” the federation said in a statement.

The 28-year-old underwent emergency brain surgery in Washington after his super-lightweight bout with Puerto Rican Matias on Friday was stopped in the 11th round by his cornerman James “Buddy” McGirt.

Dadashev, known as “Mad Max”, was unable to walk to the dressing room and was immediately hospitalised.

Doctors operated to relieve pressure from swelling on his brain.

“Right now, he’s in critical condition, but the doctor told me that he’s stable,” Dadashev’s strength and conditioning coach, Donatas Janusevicius, had told ESPN after the operation.

McGirt said after the fight he “couldn’t convince” his fighter to stop, but opted to throw in the towel when he saw him “getting hit with more and more clean shots as the fight went on”.

“One punch can change a whole guy’s life,” McGirt said.

Russian boxing chief Umar Kremlev told Russian media that Dadashev’s body would be repatriated home and that his family would receive financial aid.

Dadashev took an unbeaten 13-0 record into the 140-pound non-title fight.