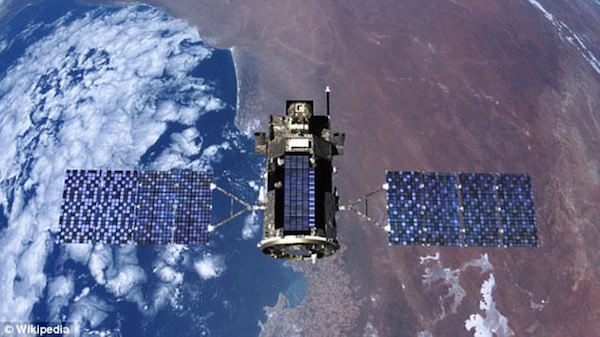 Russia could be preparing for a space war after reactivating a group of satellites that military observers believed were inoperative.

The objects first attracted attention for their unusual manoeuvrability which led some to suspect they were weapons, but they appeared to lay dormant for almost two years.

Now the spacecraft have sprung back into action, raising concerns that the Kremlin is stepping up its space race.

The agile craft, dubbed Kosmos-2491, -2499 and -2504, were smuggled into space under the cover of the routine launch of communications satellites.

In March, Komsos-2504 suddenly resumed its manoeuvres, showing the first signs of life since October 2015.

And Kosmos-2499 was also seen undertaking some strange movements of its own in recent months.

Dr Laura Grego, a space expert with the Massachusetts-based Union of Concerned Scientists, said in an interview with The Daily Beast: ‘I do find it very interesting that the satellite would go dormant for two years and then come back to life to manoeuvre.

‘One strategy to keep satellites stealthy is to pretend they are debris, i.e. not to have them manoeuvre at all at first, and then come to life later.

‘To be confident this works, you might want to be able to test if your equipment works after being idle for months or years.’

The trio of craft, which were launched between 2013 and 2015, caught the attention of armed forces in the west after they were spotted making a series of similar nimble manoeuvres.

This led experts to suspect they were built for combat or spying.

This speculation led Russian space agency chief Oleg Ostapenko to declare that the vehicles were not ‘killer satellites’ at a press conference held in December 15, 2014.

The first of the craft, Kosmos-2491, was launched in May 2014 from the Plesetsk spaceport in the Arkhangelsk region.

It is usual for these Rodnik communications satellites to be deployed in threes, but in this instance Moscow listed four spacecraft to be launched, in a notification to the United Nations.

Rodnik communication satellites, like most orbital spacecraft, do not have engines and are therefore not able to propel themselves.

It therefore surprised observers on the ground when the fourth mystery satellite, boosted itself into a slightly different orbit, according to American military correspondent David Axe.

Over the next year and a half, Russian launched two more of the mysterious objects, which are about the size of a mini-fridge.

The three unusually nimble satellites are able to get within a few dozen feet of other satellites, and are potentially able to spy-on, hijack and even destroy other spacecraft.

It is clear from their capabilities that they have the potential to become anti-satellite weapons.

‘Looking at the history of space technology, it often starts with a small and cheap satellite that’s easy to launch, then the same technology gets incorporated into something larger,’ said Anatoly Zak, a Russian-born journalist and space historian.

‘You can probably equip them with lasers, maybe put some explosives on them,’ he added.

‘If [one] comes very close to some military satellite, it probably can do some harm.’

Russia is not the only country to be trialling technology with the potential to be employed for the destruction of satellites.

The United States, Sweden, Japan and China have all already tested equipment with similar capabilities, all in the name of satellite maintenance.