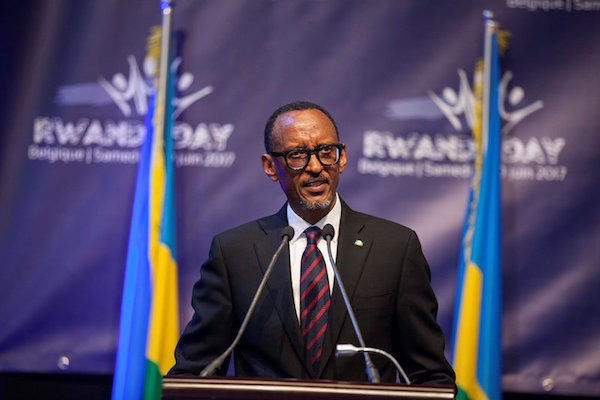 Kigali – Rwanda’s ruling party on Saturday chose longtime President Paul Kagame as its candidate for the August election, where he is expected to face a handful of challengers who either represent small parties or are independent.

Kagame, who has ruled this East African nation since 2000, was elected unopposed by Rwandan Patriotic Front members.

Out of 11 registered political parties, nine have said they would back Kagame instead of fielding their own candidates, drawing criticism from the opposition. In the 2010 election the president won with 93 percent of the vote.

The 59-year-old Kagame’s decision to pursue a third term comes after the country’s constitution was amended in a 2015 referendum, allowing him to run for an additional seven-year term and then two five-year terms.

That means he could remain in power until 2034.

Moves by some African leaders to stay in power have caused instability and violence, as in neighboring Burundi.

Rwanda’s opposition called the referendum undemocratic and the United States, a key ally, opposed Kagame’s decision to stay on. But the president has insisted the referendum occurred after parliament was petitioned with four million signatures. The country’s population is estimated at 12 million.

In a speech Saturday, Kagame urged ruling party members to start thinking about the transition beyond him. “There is no deadline, but I want you to address the reasons that have compelled you to bring me back here,” he said.

Supporters credit Kagame with bringing stability and economic transformation to Rwanda after its devastating 1994 genocide. Rights groups, however, accuse him of authoritarianism and stifling free speech.

Rwanda’s government-backed electoral commission recently announced it must vet all social media messages by candidates in the presidential election or candidates risk having their social media accounts blocked.

Police arrest man for allegedly defiling his children in Lagos