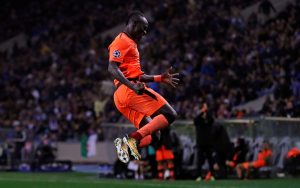 fter the final whistle the whole Porto squad were involved in a prolonged huddle in the penalty area before their most fervent fans. It was obviously a ritual but it felt more like a group-therapy session after Liverpool destroyed this proud Portuguese club.

The Dragons were slain, skewered by an attacking trident of Sadio Mane, who scored a hat-trick, Mohamed Salah and Roberto Firmino. Liverpool manager Jurgen Klopp had declared his side could compete with the best and it was no idle boast. Boom, he said, and here was the evidence that will reverberate.

This was Porto’s biggest-ever European defeat. Twenty-four hours after statement performances on European away days by Tottenham Hotspur and Manchester City and this was Liverpool’s impressive goal-laden riposte.

There was a swagger and a killer instinct while there was an imposing defensive barrier in Virgil van Dijk on his Champions League debut. As much as the goals Klopp will have been delighted by a superbly determined late block by his record signing as Francisco Soares seemed destined to score a consolation goal. The clean sheet mattered.

This emphatic result means that after reaching the last 16 of the Champions League for the first time in nine years  Liverpool will at least go one round further. The return leg at Anfield on March 6, four days before Liverpool face Manchester United away in the Premier League, is a formality. And no one will want to face Liverpool in the quarter-finals.

There were so many different  angles to this encounter. So here are a few: by scoring a hat-trick Mane become only the second  Liverpool player, after Michael Owen (twice), to achieve that feat away from home in Europe.

L iverpool also achieved the biggest away win for an English side in a Champions League knockout tie and by scoring five they have scored 28 times in the competition this season, two more than Paris St-Germain, the next highest. Seven of those have been scored by Firmino, equalling Steven Gerrard’s club record while Liverpool have 99 goals in all competitions.

Salah’s goal was his 30th of the season, and a delightful one at that, which means he is only the 13th Liverpool player ever to achieve that mark. And only one of them, George Allan a�� in 27 matches  opposed to Salah’s 36 games a�� has done it in fewer appearances. And that was in 1896. It is also only mid-February and at this rate Salah may even beat Ian Rush’s all-time record of 47 goals in one campaign; and all this in the Egyptian’s first season.

Maybe all of that is information overload but records matter and they tumble when teams play well. But the most relevant fact is that in their brilliant orange Liverpool were simply brilliant and scored some great goals, although the crucial first one was not among them.

S till it confirmed that in the pouring rain they had weathered the storm as, midway through the first half, Georginio Wiljnaldum burst through a tackle in the penalty area and the ball broke across to Mane who had pulled out to the left and was, somehow, unmarked. Even more inexplicable though was the mess goalkeeper Jose Sa made of Mane’s first-time shot allowing it to squeeze under his body and roll over the line.

Liverpool did not rest on that. It spread panic in the Porto team and they fell even further behind when James Milner’s powerful, curling drive beat Jose Sa and cannoned back off the post. The rebound fell to Salah who flicked the ball, flicked it again and finally headed it to bring it fully under control before calmly stroking it into the net. Jose Sa and his defenders did not know what to do. It was almost mesmeric.

P orto came into this tie buoyant. They are top of the league, they were unbeaten in 21 games and they had a belief in their goalscoring power and could have struck first had Dejan Lovren not done well to divert Otavio’s shot on to the roof of the net. But once behind they were in a bind with Soares wasting an opportunity as he shot wide.

The home side desperately needed to score but opened themselves up to a devastating Liverpool counter-attack early in the second half. Mane, Salah and Firmino were all involved with the latter springing the break with a back-heel. That released Salah and suddenly there was a collective expectancy as he returned the ball to Firmino whose shot, as he was pushed, was blocked by Jose Sa only for the rebound to run to Mane who swept it home.

T ie over? Liverpool had led a three-goal advantage slip in the group stages, away to Sevilla earlier in this campaign, but they already feel a different proposition and wanted more with Firmino gaining his reward. It came from another break, down the left, with Milner cutting the ball into the striker’s path and the Brazilian coolly side-footing it inside the near post.

Even then Liverpool were not finished and quickly worked their way forward again. Mane had the time and space to arrow his shot away from Jose Sa to complete the scoring, to complete his hat-trick and all but confirm his side’s passage into the last eight.