Sagay To Buhari : Sack Cabals In Your Cabinet

Sagay To Buhari : Sack Cabals In Your Cabinet 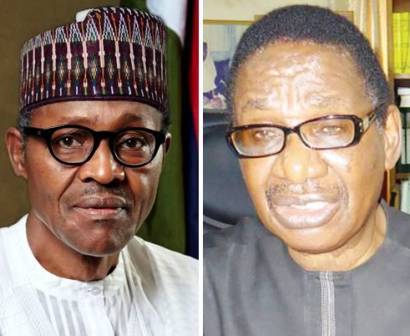 The Chairman of the Presidential Advisory Committee Against Corruption (PACAC), Professor Itse Sagay, has asked President Muhammadu Buhari to sack those he described as a�?cabalsa�� in his government.

Sagay accused them of being the clog in the wheel of progress of the Buhari administration.

The Constitutional Expert expressed his opinion in an interview, Wednesday, shortly after he delivered the convocation lecture of the Federal University of Technology (FUT), Gidan-Kwano, Minna, Niger State.

Prof Sagay who, however, declined to mention the names of the cabals insisted that a�?they are not helpful to the President and the government; everybody is complaining about them.a�?

On the Maina saga, he explained that those behind his recall to the civil service should also be identified and punished because the matter was still very fresh and had not been swept under the carpet.

The trouble with the former chairman of the presidential task force did not start with the President Buhari administration, Sagay pointed out, but assured that the government was determined to bring the problems to an end to the satisfaction of all Nigerians.

Apparently worried by criticisms of the Buhari administration by Nigerians as a result of hardship in the country, he advised that a�?Nigeria should stay with President Muhammadu Buhari and Vice President Yemi Osinbajo.a�?

a�?Buhari and Osinbajo have absolute integrity; if we dona��t make use of them now, I dona��t know when next we will have leaders like them,a�? he said.

The President, according to Sagay, should be firmer in decision-making, stating that if Nigeria must get to the Promised Land, the government would have to introduce some dose of autocracy or firmness.

11 thoughts on “Sagay To Buhari : "Sack Cabals In Your Cabinet"”