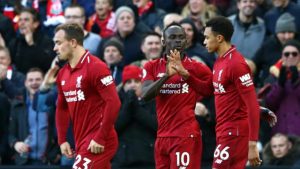 Liverpool handed Cardiff City a 4-1 defeat, and central to it was African duo Mohamed Salah and Sadio Mane.

Salah who had endured a torrid period but had the international break to thank continued with his scoring run, grabbing the opener, thus, making it three consecutive games.

In the 10th minute, Alexander Trent-Arnold’s cross caused troubles in Cardiff’s box with Mane and Georginio Wijnaldum unsuccessful with their efforts, Salah pounced to smash into the net.

Six minutes after the hour mark, Mane made it two with a ferocious left-footed effort.

Callum Paterson slotted past Alison in the 77th minute to halve the deficit but Jurgen Klopp’s men weren’t done as Salah contributed two lovely assists to see off the Bluebirds.

The former Roma star has now scored four times and assisted twice in the past seven days for Liverpool and will hope to continue with the form.

Uzoho Will Not Be Scared Of Messi – Rohr

Chelsea are playing Kante in the wrong position: Carragher, Ginola