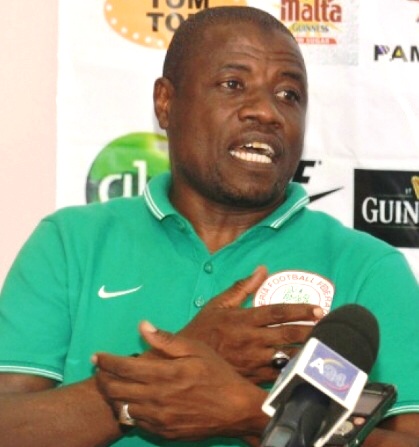 Home-Based Eagles Coach, Salisu Yusuf has praised his players for passing their most difficult test in the Tournament by beating a stubborn Angola side which took the lead in the first half, before the Super Eagles fought back to win 2-1in extra time and set up a semi-final clash with Sudan on Wednesday.

Yusuf said he never lost faith in his players, he also reiterated his support for the under-fire striker, Anthony Okpotu who has been criticised for his wastefulness in front of goal.

a�?Todaya��s (Sunday) game was the most difficult for us in the tournament as we fought for 90 minutes against a good team,a�?

a�?We never lost faith in our players because we were creating chances and the more you do that the chances of scoring are higher.a�?

a�?Ia��m so confident about Anthony Okpotu and we believe in him and he has been scoring despite missing some chances, but he will be much better in the coming matches,a�? the former Kano Pillars coach stated.

a�?We never underestimated Angola. They play good football and are a good team, but the important thing was to win and we won.a�?

a�?Football is sometimes not favorable. We scored and Nigeria equalized in the last minute before winning it in extra time,a�?

Vasiljevic said during his post-match interview with the media.

a�?We thought it was enough to hold on for a win but it wasna��t enough and we lost. I hoped to have a good result, but this is football for you.

a�?The tournament provides us with a lot of experience which will help us going forward because this is a tournament that gives a great experience to the players.a�?