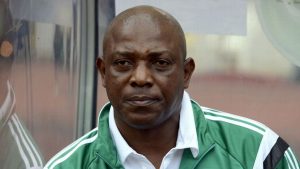 Salisu Yusuf hopes that Nigeria can build on the legacy of Stephen Keshi at the African Nations Championship as their adventure in Morocco continues.

The home-based Super Eagles marked what would have been the legendary Nigeria defender and head coacha��s 56th birthday with a come-from-behind 3-1 victory over Equatorial Guinea on Tuesday to reach the quarter finals of the CHAN.

Speaking to KwesA�ESPN after the match, Yusuf paid tribute to the late Keshi a�� who passed away in June 2016 aged 54 a�� and expressed hope that the 2018 generation could build on the third-placed finish the a�?Big Bossa�� achieved in 2014.

a�?[The win] was a good tribute to him,a�? Yusuf told KwesA�ESPN after the match. a�?He started this CHAN, he was also in the quarter finals, and he worked to progress to where he was.

a�?He finished third, and I hope that we can add to what he contributed with his team.a�?

Four years ago, and 12 months after he became the second man to win the Africa Cup of Nations as a player and coach, Keshi picked up bronze at the CHAN with a team containing Rabiu Ali, who is present with Yusufa��s selection in Morocco.

On that occasion a�� the Eaglesa�� best finish at the biennial tournament a�� Nigeria qualified second in their group alongside Mali, and beat Morocco after extra time n the quarters before falling to Ghana on penalties in the semis.

Yusufa��s side started the ongoing tournament slowly and were held by Rwanda in their opener, but after conceding in the 40th minute against Equatorial Guinea, they bounced back in the second half with goals from Anthony Okpotu, Dayo Ojo and substitute Ali.

a�?We didna��t mention [Keshi before the game],a�? Yusuf confided to KwesA�ESPN. a�?We kept it in our minds until we went for dinner, because death can make a certain reaction in certain people, in certain players and we didna��t want to release that.

a�?When we come back from dinner, we will talk about that and pray for him.a�?

Keshi remains adored in Nigeria for his 14-year playing career with the national side a�� during which he accrued 60 caps a�� and for ending the Eaglesa�� 19-year wait for a title with his AFCON triumph as a coach in 2013.

He also spent time in Belgium, notably with Anderlecht, and also enjoyed stints as head coach with Togo and Mali.