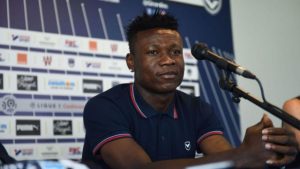 Bordeaux forward Samuel Kalu is expected to be the leading new inclusion when Gernot Rohr names his Nigeria squad this week ahead of the 2019 Africa Cup of Nations qualifier in September.

Rohr told KweséESPN that the 20-year-old is very  likely to be in the squad , which will be named this week ahead of the match on 8 September.

“Kalu will probably be in the squad. I have been watching him and I saw him play again this week,” Rohr said.

Kalu, an explosive winger with pace to burn, joined the French side from Gent during the summer transfer window in an 8 million Euro deal, but has been  on Rohr’s radar  for a while.

“[But] I’ve never selected him,” Rohr said last month. “I saw him play for his team. I took Moses Simon, who has been in my group for two years.”

With Victor Moses’ retirement from the Super Eagles, the 20-year-old is now set to step into the breach.

Also expected to be in with a chance of a call is the highly-rated former FK Ventspils forward Adeleke Akinyemi, who recently moved to IK Start.

Galatasaray’s Henry Onyekuru, who was a lock for the World Cup squad before an unfortunate ACL injury, is also expected to make a return.

Nigeria travel to Seychelles for the second match of their qualifying campaign. The Super Eagles lost their match day one fixture 2-0 at home to South Africa.

Premier League Suspended Until April 4 Because Of Coronavirus