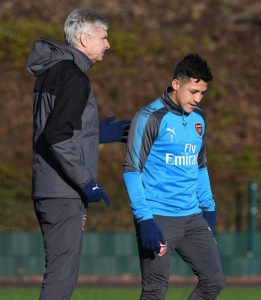 The Chilean forwarda��s A?35 million move from Arsenal has not been completed in time for Sanchez to make his United bow at Turf Moor on Saturday

Alexis Sanchez will not make his Manchester United debut at Burnley on Saturday after the club failed to register him with the Premier League before the 12pm deadline on Friday.

The Chilean attacker is due to leave Arsenal for the 20-time English champions in a A?35 million deal which will see him earn up to A?350,000 a week, but he will not be able to play for United this weekend when they head to Turf Moor.

Under Premier League rules, teams must register a transfer and all supporting documentation with league representatives before midday on Friday in order for a player to be eligible to play in that weekend’s fixture.

But Sanchez’s switch has been held up due to the delay in the completion of talks regarding Henrikh Mkhitaryan’s part-exchange move to Arsenal, and both players were subsequently seen training with their existing clubs on Thursday as they awaited a final agreement.

While Mkhitaryan was photographed with his United team-mates at the club’s Carrington training ground, Sanchez was left going through the motions with Arsenal’s development side as manager Arsene Wenger attempted to focus his squad’s efforts on Saturday’s clash with Crystal Palace.

Sanchez’s imminent arrival comes after a dramatic couple of weeks, with the 29-year-old having originally seemed destined to sign for Manchester City.  But the Blues, who had agreed a A?60m deal with Arsenal for Sanchez last summer, were outbid by United and eventually withdrew their interest in the attacker  .

And, despite some talk of late interest from Chelsea, United have moved quickly to wrap up a deal with Sanchez but have been denied the chance to give him a first appearance this weekend. Instead, he will not be able to make his United debut before next Friday’s FA Cup fourth-round trip to Yeovil Town.

21 thoughts on “Sanchez won’t make Man United debut at Burnley, no thanks to missed registration deadline”