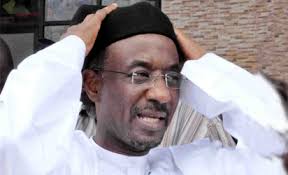 Muhammadu Sanusi has accused operatives of the Nigeria Police, Department of State Services and others of manhandling him in the process of his leaving the palace and taking him to Nasarawa State after his dethronement by the Kano State Government on Monday.

Sanusi levelled the allegations in an affidavit sworn to by his Chief of Staff, Muhammad Mannir Sanusi.

The Kano State Government had on Monday deposed Sanusi, accusing him of insubordination to officials of the Administration, including Governor Abdullahi Ganduje.

Respondents in the case before Justice Chikere include the Inspector-General of Police, Muhammed Adamu; Director General of the Department of State Services, Yusuf Bichi; Attorney-General and Commissioner for Justice of Kano State, Ibrahim Muktar; and the Attorney General of the Federation and Minister of Justice, Abubakar Malami (SAN).

In the 42 paragraph affidavit, the CoS to the former Governor of the Central Bank of Nigeria told the court how Sanusi and his family members were maltreated by security agencies in the palace after his dethronement was pronounced.

He equally narrated how after arriving the Nnamdi Azikiwe International Airport, Abuja, Sanusi was driven to Lafia in Nassarawa State, a journey of seven hours by road, in the dead of the night, only to be taken against to Loko and finally Awe, both in Nasarawa State.

He said Sanusi “was appointed and crowned the 14th Emir of Kano emirate council in Kano state, the Paramount traditional ruler of the city of Kano in Kano state of Nigeria on June 9, 2014, and he acted creditably well in that capacity without and let or hindrance whatsoever from any quarters and he remained the Emir until he was deposed by the Kano state government on March 9, 2020.

“That I verily believe the Kano state government purportedly removed the applicant from office as the Emir of Kano on 9th March, 2020 without any basis or justification whatsoever and was not given any hearing on any allegation on which his removal was predicated.

“That while the applicant was waiting for the letter of deposition to be served on him, there was commotion in the private wing of the palace as some unauthorized persons tried to enter the family section of the palace.

“I am aware (because I was present when it happened) that the applicant informed the Commissioner of Police, Kano state who later came in (as aforesaid) that his friends had sent an aircraft to fly him and his family to Lagos and requested that they should be provided with necessary security to the airport so that he could leave.

“I know for a fact that the Commissioner of Police, Kano state (as aforesaid) refused the applicant’s request for security protection and to carry his family with him to Lagos and stated that he has no such instruction from above, but instead directed that the applicant be flown to Abuja and then onwards taken to Nassarawa state.

“In order not to jeopardize his safety and of any member of his family or indeed other persons around, the applicant cooperated and proceeded in the vehicles provided by officers under the command of the respondents.

“The said Commissioner of police, Kano state along with other officers under the command of the respondents, harassed and rushed the applicant out of the Emir’s palace, Kano, without letting him take any personal belongings and personal effects, along with him, as they took him into their waiting vehicles.

“The applicant was then taken, in the company of loads of armed men, being officers under the command of the respondents, to the Nigerian Airforce base in Kano where he was put in a private aircraft to Abuja and departed Kano at about 6:40pm.

“The applicant was separated from his family who were also carried out of the palace. I was informed by the applicant on March 10 at about 9:00pm via a phone conversation of the following facts which I verily believe to be true as follows:

“Upon arrival at the Nnamdi Azikiwe International Airport, Abuja, he was conveyed first to Lafia, then to Loko area of Nassarawa State, after driving for about seven hours in the dead of the night.

“On March 10, 2020, he was taken back to Lafia and from there to Awe in Nassarawa State. Since his deportation or forceful relocation from Kano, he has not been allowed to move freely, to live freely, to associate with those he desires or to work in the way he desires. That his relocation first to Abuja, then Loko, and subsequently to Awe in Nassarawa State and separation from his family are against his wish and without his consent.

“He has never been invited by any of the respondents for the purposes of any investigation, nor in relation to any offence nor has he been convicted by any court and he has not been served with any order of court for his arrest and detention.”

Re: Governor Okorocha Glorying In Impunity

Your Laptop, Your Laps,and Your Health

73 thoughts on “Sanusi Reveals How The Police, DSS, Others Manhandled Him And His Family During Eviction From The Palace”