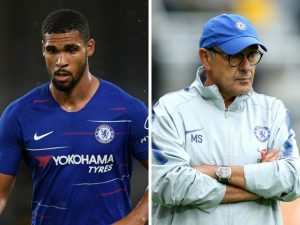 Loftus-Cheek, 22, has only made one Premier League start this season, while he has been given more of a chance in Europe.

The England international is up to six goals this campaign, with three of those coming in five Europa League starts.

Sarri feels Loftus-Cheek can become a star at Chelsea, seemingly ruling out any chance of the midfielder making a loan move in January.

“He has played seven matches out of seven in the last month, so I’m really very happy with him. He’s improving a lot from the tactical point of view.

“In future, he will be a midfielder but sometimes we need to use him as a winger, especially in the last part of matches with his physical impact. So he’s a very important player for us.

“In the future, he will be more than important.”

10 thoughts on “Sarri: Loftus-Cheek can become a star at Chelsea”