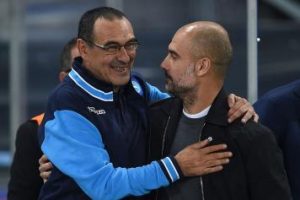 According to the latest reports from La Gazzetta dello Sport, Kalidou Koulibaly and Jorginho could both be set to bid farewell to Napoli during this summer’s transfer window.

Indeed, coach  Maurizio Sarri’s future is far from certain  and he could be tempted by the idea of managing Premier League giants Chelsea next season. There is a growing sense among Italian journalists that the Campania native may have taken his side as far as he possibly can.

Should he decide to leave the Partenopei, it is likely that Sarri would want to take the likes of Koulibaly and Jorginho to Chelsea with him, given the fact that they are already familiar with his very particular style of play.

It remains to be seen whether president Aurelio De Laurentiis will be able to keep the Senegalese stopper at the Stadio San Paolo, especially considering that he is yet to be convinced of the club’s technical project for next season.

Meanwhile, Manchester City manager Pep Guardiola has set his sights on luring the Italian internationalist to the Etihad Stadium. The Citizens would be willing to pay up to a��50 million to secure his services, though reports suggest this would not be enough to tempt the Vesuviani into selling.

Essendon saga ‘will end up killing me’