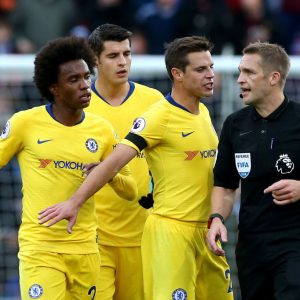 Speaking at his weekly pre-match press conference, as reported by ESPN’s Liam Twomey , the Italian revealed that the defender would remain club captain, despite not featuring regularly for the Blues.

Sarri also revealed that Azpilicueta will be the vice-captain and lead the Blues in Cahill’s absence.

It has been the one decision Sarri was yet to make after replacing Antonio Conte over the summer.

With Cahill finding game time hard to come by this season, many expected Azpilicueta to step in as the full-time captain of the club.

The former England international has been limited to game time in cup competitions this season, casting serious doubts over his suitability for the role.

Azpilicueta has been a mainstay in the Chelsea side this season, slotting back into a more natural right-back position under Sarri.

The Spaniard is expected to captain the side on Sunday when the Blues welcome Crystal Palace to Stamford Bridge, with Cahill likely to miss out.

Why I Rejected Joshua Rematch – Klitschko