Sarri satisfied with result, improvement from his ‘nervous’ Chelsea in 2-0 win over Fulham

Sarri satisfied with result, improvement from his ‘nervous’ Chelsea in 2-0 win over Fulham 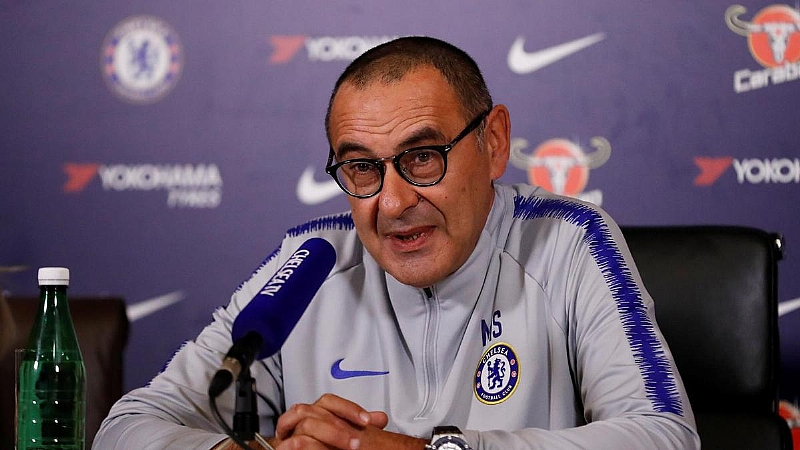 Maurizio Sarri wanted a reaction from his first-choice team after the Tottenham disaster and he got it, at least for a half.

Fulham started with intent but after N’Golo Kanté robbed Jean Michael Seri and played in Pedro for Chelsea’s first goal in the fourth minute, the Blues took over. The ball movement was what Sarri has been demanding. It was quick, it was crisp and it never stopped moving.

The second half was another story. The ball stopped moving quickly, good decisions were harder to come by and Chelsea didn’t look threatening. Indeed, but for a fine Kepa reaction save off of a corner, Fulham might have tied it up.

Sarri, though  was less willing  to credit Claudio Ranieri’s work than he was his own player’s nerves.

“I think today it was really very important the result. We started very well. Then after 1-0 the players had a good application of attention, but we didn’t kill the match. But today we were a little tense, nervous.

“Of course it wasn’t easy the days after Tottenham for me and the players. But we have talked too much about that match. We lost it after three months and a half, it can happen. It was important to react. In the mind of the players there was only the result.”

The assist was Kanté’s second of the season and Sarri found his performance pleasing, albeit still short of ideal.

“Today he was better when the ball was on the other side of the pitch, I remember only one mistake in the first half. With the ball on the other side he has to stay close to Jorginho otherwise for us it’s a big problem. Jorginho is well able to make passes through the opponents but he’s not so good in the defensive phase with open spaces.’”

Up front, neither starter Olivier Giroud, nor 70th-minute substitute Álvaro Morata made a significant impact.

Asked why Giroud got the nod over Morata (having also started on Thursday against PAOK), Sarri deflected rather than start a controversy, calling it normal rotation for two strikers in decent form — except obviously there was no rotation to be seen. Presumably Morata will play Wednesday’s tilt against Wolves before Giroud’s back at it on Saturday against Manchester City. Both strikers will have been disappointed to not find the back of the net against the porous Fulham defense.

Nizaar Kinsella
✔ @NizaarKinsella
Sarri on Giroud-Morata: “No, they need only to find continuity because Morata had a good period. Giroud is in a good period. They need more continuity maybe. I think it is very normal that sometimes we play Morata or Giroud. We play every three days, it is normal.” # CFC # CHEFUL

“I think we were in control of the match. But I think we were nervous, so it wasn’t easy to play. The team was really very applicated on the pitch. We could have done better in offensive phase, I think. But we were tense. At 1-0 you have to keep the result.”

After the fiasco that was Tottenham at Wembley, Chelsea have at least earned a measure of redemption, and combined with Arsenal’s win in the North London Derby, are back in third, one point ahead of both Spurs and the Gunners. The fight for those last two Champions League spots will be close the whole season.

11 thoughts on “Sarri satisfied with result, improvement from his 'nervous' Chelsea in 2-0 win over Fulham”