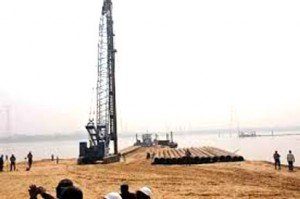 Work on the second Niger Bridge linking Asaba in Delta and Onitsha in Anambra, has reached 50 per cent completion, Mr Wkscont Ajani, Federal Controller of Works, Anambra, has said. Work pillars still ongoing at the Delta State end. Ajani said in Awka on Thursday that 310 out of the 615 piles in the project had been driven in addition to one pipe culvert and four box culverts. He said that seven pile caps at 100, 110, 120, 290, 300, 310, and 320 had also been completed. “At the Asaba end, abutment has been completed while preparation of reinforcements for the piles, pile caps, pier stems and box culverts are in progress at the Onitsha main yard,” he said. Ajani who did not state the current cost of the project said it was awarded to Julius Berger construction firm in 2014 at the initial cost of N200 billion. The federal controller of works said that the contract had four years duration and was awarded under Public-Private-Partnership. He noted that the first Niger Bridge was constructed in 1965 to achieve Federal Government’s policy of expansion and upgrading of transport facilities. He said that the bride was built to support the nation’s development and economically link the then regions.

“However, since the construction, commuters and vehicles travelling on roads in the South-East have increased as a result of population growth, increased income and urbanisation,” he stated. Ajani said because the existing Niger Bridge could no longer sustain the increasing volume of traffic, government decided to construct a second one. The federal controller of works said the new bridge would form an important link within the key national transportation corridor. He said it would provide a strategic access point for people of the south-east and the south-south zones in particular, and Nigeria in general.

“The benefits of the bridge include reduction in the strain on the current bridge infrastructure and easing traffic flow. “It will improve safety and security in the area by potentially reducing traffic congestion; and improve the commercial viability of the immediate states and the country. “Local residents will have opportunity to work on site during the construction phase, thereby improving their economic prospects. “This will improve capacity building for young Nigerian engineers in different areas of engineering, especially highway engineering,” he said. Ajani said the bridge would go a long way in improving the local content during its construction. He also said that on completion, farmers in the area would have more access to a larger market within a reduced time frame. NAN reports that the construction firm has commenced building of a new site yard at Ogbaru in Anambra to ensure ease of work. However, the heavy rains recorded in the area in recent the weeks have slowed down work on the project. Wall Formwork System – Cassaform ’s P300  is a universal modular formwork system suitable for casting in-situ walls or any vertical structure on site. The P300 Formwork panels are simple, strong and sturdy. Thanks to their modularity they are suitable both for small medium-size sites and for large projects to build shear walls, retaining walls, shafts, columns, abutments and piers.

A staff of the company who pledged anonymity told NAN at the project site that work stopped around 12 noon on Wednesday due to the rain which started as early as 6.00. He said that the water level in the river was on the increase and added “as soon as the water level reduces, full work will continue. “We are working on some access roads while the federal ministry is still negotiating with land and building owners over compensation,” he said. Meanwhile, the people of the riverine communities of Amakom and Oko-Analu in Delta have appealed to the federal government to expedite action on the project. According to them, the slow pace of work on the project is not desirable and disappointing. Mr Uzoma Achidike, a teacher at Amakom Primary School, said the pace of work was a major source of concern to the people because they had expected government to give it priority attention. “Here in the community, we have expected that government would take this project very seriously by ensuring prompt provision of logistics and strict supervision to enable the contractor deliver. “Regrettably, the reverse is the case here. As you can see, the whole place is just sand and sand pilling every day.

There has been no major work going on here. “For instance, the slow pace of the sand-filling is presently causing a huge pain to us because it has caused heavy flooding in our communities. “Flood has sacked many people in Amakom and Analu, and many of them, mostly farmers, have abandoned their farms to seek refuge in either Asaba or Onitsha,” Achidike said. Also Mr. Boniface Okelue, a youth leader in Amakom, said the pace of work had not been encouraging. Okelue said that the locals had expected quick action on the project to solve the perennial traffic problem on the 53-year old first Niger Bridge. “We had thought by now massive work will be going on here, but that has not been the case over the past two years. “Go and see people suffering at the old bridge every day due to heavy traffic.

Sometimes people sleep there till the next day,” Okelue said. A farmer, Mr. Donatus Ebenuwa, said work on the road connecting the bridge to Oko mainland had been slow. “The work is very slow; the sand-filing job is not even going on regularly. When you see them today, you will not see them again for the next three days. “Our roads and primary school have been over-flooded; government should ensure that the project is completed quickly,” Ebenuwa said. When NAN visited the Asaba end of the project site, only security men guarding the heavy equipment including cranes obtained from a crane hire, cabins, corrugated metal pipes, culvert rings and tractors, among others, were seen. (NAN)