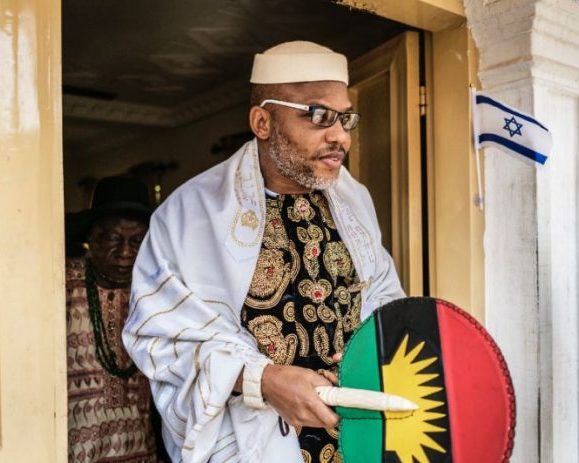 The Indigenous People of Biafra (IPOB) has said that no fewer than 21 Jewish worshipers were arrested on Sunday by the police during a prayer session at the Umuahia home of its leader, Nnamdi Kanu.

“The leadership and entire family members of IPOB condemn the abduction of 21 Shalom Church members and other Christian denominations praying in the residence of IPOB leader, Mazi Nnamdi Kanu, by Nigerian security operatives on Sunday morning,” IPOB said.

According to a statement by IPOB’s Spokesman, Emma Powerful, the worshippers had gathered to pray and cleanse the compound when the security operatives swooped down on them and whisked them away to the Zone 9 Police Headquarters, Umuahia.

“This is to alert the whole world that the Jewish worshippers praying in Afaraukwu Ibeku at IPOB leader’s residence are currently undergoing severe torture in the hands of Nigeria security agents at the Central Police Station, Umuahia, and Zone 9 Force Headquarters, Ehimiri Estate, Ikot Ekpene Road, Umuahia.

“The Nigerian security agents tortured the Jewish worshippers who came to pray at the compound on Sunday morning without any provocation.

“The unprovoked attack on these innocent worshippers, whose crime was to pray and spiritually sanctify the residence of IPOB leader desecrated when the Nigeria army and other security agencies killed and maimed over 28 innocent unarmed members of IPOB, including the abduction of our leader, Mazi Nnamdi Kanu, since last year, September.”

IPOB condemned the arrest of the innocent worshippers and demanded their immediate and unconditional release.

The pro-Biafra group also sought the United State of America’s intervention to free the arrested worshippers.

It said the action of the operatives was in clear violation of a pact sealed by US President Donald Trump, and his Nigerian counterpart, Muhammadu Buhari, during the latter’s recent visit to Washington.

IPOB said the arrest amounted to a declaration of war against Christians and part of the hidden agenda to ultimately Islamise Nigeria.

When contacted, the Commissioner of Police, Anthony Ogbizi, confirmed that some persons were arrested at Kanu’s home but refused to disclose the exact number.

He said those arrested were currently being interrogated, adding that the arrest was on suspicion that they were members of the proscribed IPOB group.

“How did they gain access to Kanu’s house? You are aware that some improvised explosives are being used in South East now, and we are looking for terrorists responsible for that.

“Yes, there was an arrest and we are still interrogating them.

“You should know that IPOB is an outlawed terrorist organisation.

“Find out from them where they came from. How did they get there if they are not IPOB members?

“When did they convert that place to a synagogue? It is not a place that makes IPOB. It is a person. We are suspecting them to be IPOB members.”

The IPOB statement also claimed that some of the worshippers were taken to an unknown place and demanded that the security agents should be made to account for them.

“Some of the Jewish worshippers have been abducted and taken to unknown places for easy execution.

“The Nigerian security agents have declared war on Christians and religious groups once again, as a daring move against the warnings, and US President, Donald Trump’s agreement made in Washington, D.C, with the Nigeria President Muhammadu Buhari.

“We are calling on men and women of good conscience, the US embassy and all civilised nations to see reasons to fight and stop these barbaric moves against the brazen Islamisation and religious intolerance in Nigeria,” the statement stated.

IPOB said the Nigerian government should be held responsible if anything happened to the worshippers.

Letter To A Friend: We Are In Trouble