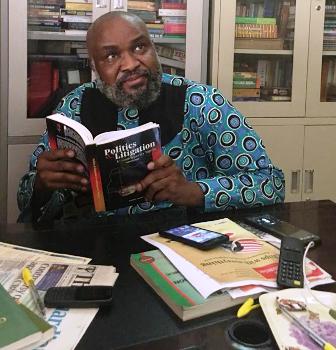 Mathematically, Nigeria is said to be 59 years of post-independence in the sense that it was on October 1st1960 that some foreign occupying forces (Great Britain) retreated by general consensus of both the occupier and the occupied.

It was on that day that political scholars reckon that Nigeria gained flag independence with the lowering of the Elizabethan or rather the union Jack which is the baptismal name of the British flag.

As an aside but certainly critical, do you know that the first mistake those who received the flag independence made was not to have baptized our National flag? The Nigerian Flag unlike its progenitor is nameless but embodies symbolism.

That aside, another gross error of judgment made at independence was the short sightedness in not renegotiating the terms of the union which was consummated in 1914 when the southern protectorate was unified with the Northern protectorate in what political historians chose to call amalgamation.

From the sketch of historical accounts, it doesn’t appear that the amalgamation agenda was borne out of a genuine national consensus but was rather a business idea by the British colonialists to maximize their drive for more natural and human resources to enrich their local economisand previsely their agroallied industry. For instance, most Nigerians are not aware of who were the witnesses at the so called amalgamation of 1914 or was our head shaved in our absence? Why are there no known indigenous witnesses to the signing of the amalgamation treaty or was it purely a British affair?

This mistake of history by our ‘heroes past’ to renegotiate our union or to at least brainstorm on the necessity or otherwise of the continuous existence of Nigeria as an entity or otherwise, still hobbles Nigeria and is the fundamental source of the groundswell of disagreements and discontents amongst the divergent segments of the contemporary Nigerian society. This is the origin of the current agitation for self determination and/or restructuring. Still dwelling on the fundamental symbolism of the 1960 independence, let us revisit the National flag of Nigeria and examine its import and philosophy.

First, we note that the symbolic meaning of the green, white, green flag with vertical stripes represent Nigeria’s natural wealth, while the white band represent peace.

However, as Nigeria has become a grown adult at 59, it is safe to state that those two symbols of natural resources and peace have eluded the millions of Nigerians who have now become endangered species, deprived, oppressed, marginalized and made vulnerable by the government whose legal mandate is to guarantor safety of lives and property of the citizens.

The natural resources of Nigeria have become like curses on corporate Nigeria even as peace is an illusion.

One British journalist who spent four decades covering the energy sector in Africa, wrote a big book he chose to call crude continent, in which he narrated how the discovery of rich natural resources of crude oil in Nigeria, as well as few other African nations, sparked off serial corruption on the part of African leaders. As I write, the communities whereby these huge natural resources are found are impoverished, their environments devastated, raped, polluted and regularly vandalised by multinationals with the government as a necessary collaborator. The people of Niger Delta are today facing social injustices the scale that is unfathomable but yet their backyards are the habitation for much of the National wealth which only less than 1 % of Nigerians made up of politicians and their surrogates share amongst themselves.

Not long ago, anyway the United Nations office on drugs and crime (UNODC) made a presentation in which it estimated that as at a decade ago, nearly $400 billion of Nigeria’s crude oil revenues have all been stolen by successive political and military leadership of the Nigerian state.

Take for instance, one of the most brutal dictators to have graced Nigeria as a military despot stole nearly $5 billion which was found in few of his many unknown accounts and this late dictator, General Sani Abacha, successfully hid these massive quantum of cash in foreign jurisdiction at the time Nigeria was a pariah state under different global wide sanctions. You can then imagine how much would have been stolen by governments of Nigeria under the periods that the country is not under any form of sanctions including now that the country is marking 59th year of independence.

Just look at who is 59 but still her citizens are so poor, endangered and buffeted by all kinds of bloody violence whilst the government in place look the other way whilst Fulani bandits, armed kidnappers, terrorists have continued to unleash devastating violence on the public space with countless casualties.

Ideally, a child who is 15 years of age is no longer looked upon as a child, and so you wonder why at 59, Nigeria is such a very dangerous place, made so by incompetent political leaders and a whole lot of uncharismatic followers who do not bother to press on for the protection and respect of the constitutionally guaranteed human rights which are enshrined in chapter 4 of the Nigerian constitution.

This constitution which is a sacred code of conduct is currently defecated upon by those who wield temporary political power.

These politicians violate the constitutional rights of citizens with impunity.

Politicians treat the citizens as if they do not matter in the national calculations.

But reading the latest book by Michelle Obama called “Becoming” will prove the statement that a 59 year old adult must behave well because even at the age of 15, Michelle who would go on to become America’s 44th first lady and wife of USA president number 44, Mr. Barack Obama, was looked upon as an adult.

She wrote as follows: “BY THE TIME I was fourteen, I basically thought of myself as half a grown-up anyway – maybe even as two-thirds of a grown-up. I’d gotten my period, which I announced immediately and with huge excitement to everyone in the house, because that was just the kind of household we had. I’d graduated from a training bra to one that looked vaguely more womanly, which also thrilled me. Instead of coming home for lunch, I now ate with my classmates in Mr. Bennett’s room at school. Instead of dropping in at Southside’s house on Saturdays to listen to his jazz records and play with Rex, I rode my bike right past, headed east to the bungalow on Oglesby Avenue where the Gore sisters lived.”

The question we need to answer is why at 59, the Nigerian state and her overspoilt political elite still behaves like a toddler going by the crude type of political leadership in place?

The straight forward answer is the general lack of will power by the citizens to stand by their rights as provided for generously in chapter 4 of the 1999 constitution and the willingness of the people to be oppressed by the same persons they elect to govern.

I will not hesitate to state that although as at 1982 or thereabout when the intellectual oracle from the black world Professor Chinua Achebe wrote his smallest book called “The Trouble with Nigeria”, it can be argued that basically the fundamental crisis of underdevelopment of Nigeria was caused by poor leadership.

Here is what Professor Achebe wrote: “The trouble with Nigeria is simply and squarely a failure of leadership. There is nothing wrong with the Nigerian land or climate or water or air or anything else. The Nigerian problem is the unwillingness or inability of its leaders to rise to the responsibility, to the challenge of personal example which are the hallmarks of true leadership.”

But fast forward to 2019, Nigeria’s problem is both poor leadership and lethargic followership.

Take for instance, in 2015, during the general elections as well as the 2019 polls, majority of voters succumbed to the temptation of mortgaging their consciences for bags of salt, rice, wrappers, and few cash which were freely distributed to would-be voters by those seeking the mandate of the people. Also, at 59 Nigeria has the World’s most incompetent electoral commission and the World’s most compromised electora and judicial systems that aids heist of ballots during elections in favour of any incumbent President vying for re-election.

Any wonder then that Nigeria at 59 is almost behaving like a failed state?

Now some governors negotiate with armed bandits and mass killers.

Today, the Federal government goes about freeing detained boko haram terrorists and even reintegrating them to live eye ball to eye ball in the same communities whereby they committed genocide, all in the guise that they have repented. Victims of these heinous crimes are marginalised and overlooked whilst the criminals are glamourised and celebrated by politicians. Just look at who is 59!

These are constitutional violations. But the political leadership of the 59 year old sovereign nation see nothing unethical or criminal when they wined and dined with armed bandits. The abnormal has been normalised by the political class who as we speak are drinking themselves to stupor with expensive champagne and strong wines even as 90 million Nigerian citizens have become absolutely poor with the 59 year old Nation becoming the poverty capital of the World only last year.

As earlier stated, the primary issue of lack of a national consensus as the basis for our unity still haunts us like a ghost.

Nigeria at 59 needs to work out strategies for restructuring to fix the broken society and to make all component parts to truly have a sense of belonging.

Just look at who is 59! yet all the top national security heads are from one section of Nigeria and are all moslems.

This distorted and sectional formation of national security team violates the Federal character principle as contained in the constitution which I will cite shortly just as the incapacity of government to safeguard the lives of Nigerians constitutes serious breach of the constitution.

Specifically, section 14(1) (2) (3) state that: “(1) The Federal Republic of Nigeria shall be a State based on the principles of democracy and social justice.” (2) It is hereby, accordingly, declared that: (a) sovereignty belongs to the people of Nigeria from whom government through this Constitution derives all its powers and authority; (b) the security and welfare of the people shall be the primary purpose of government: and (c) the participation by the people in their government shall be ensured in accordance with the provisions of this Constitution. (3) The composition of the Government of the Federation or any of its agencies and the conduct of its affairs shall be carried out in such a manner as to reflect the federal character of Nigeria and the need to promote national unity, and also to command national loyalty, thereby ensuring that there shall be no predominance of persons from a few State or from a few ethnic or other sectional groups in that Government or in any of its agencies.”

As Nigeria marks 59 of failed promises and aspirations, let the people resolve to become resilient and to consistently demand accountability from the politicians notwithstanding the clear threats to their lives by armed security forces manipulated by the elites to kill the people who would resist their oppressive and tyrannical tendencies.

We must repossess the nation by insisting on the obedience of the constitution and the strengthening of the institutions of democracy. Let us say no to the EVOLUTION OF A STRONG MAN AS NIGERIA’S PRESIDENT BUT TO WORK TOWARDS ESTABLISHMENT OF SYRONF AND ENDURING DEMOCRATIC INSTITUTIONS. Fellow Nigerians it is a mournful independence anniversary.

improving  The Standard Of Tertiary Education In Nigeria.