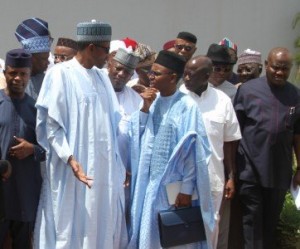 THE Political quagmire between governor Nasir El- Rufai of Kaduna state and the three Senators representing the Senatorial districts of the state, took another dimension Thursday as the Senate rejected Kaduna State Development Policy Operation (DPO) in the sum of USD350 million as contained in the 2016 a�� 2018 External Borrowing (Rolling) Plan of President Muhammadu Buhari.

The three Senators, Shehu Sani, APC, Kaduna Central; Suleiman Hunkuyi, APC, Kaduna North and La’ah Danjuma, PDP, Kaduna South said that it became imperative for the credit facility to be rejected because critical stakeholders from the State were never consulted and for the fact that the State was already heavily indebted. The rejection followed the presentation of the Report of Committee on Local and Foreign Debts Kaduna State Development Policy Operation (DPO) Credit Facility of USD 350 by its Chairman, Senator Shehu Sani (Kaduna Central).

According to Senator Sani, the Committee recommended that a�?the Senate do reject the request of USD350 million for Kaduna State as contained in the 2015 2018 External Borrowing (Rolling) Plan of Mr. President, Commander-in-Chief of the Armed Forces. a�?That with the high total debt stock of Kaduna State at the moment, the new borrowing sought, will make the debt service to revenue ratio high, thereby worsening the State Government’s ability to meet its other basic obligations to the people and further erode the economic viability of the State.

a�?That the Senate do reject Kaduna State Development Policy Operation (DPO) in the sum of USD350 million only as contained in the 2016 a�� 2018 External Borrowing (Rolling) Plan of Mr. President Commander-in-Chief of the Armed Forces.a�? Speaking further, Senator Sani said that in its findings, the Committee discovered a�?That the Development Policy Operation, DPO (Budget Support) of USD 350 million for Kaduna State was approved by World Bank in 2016 and captured in 2016 a�� 2018 borrowing plan as approved by the National Assembly.

a�?That the credit facility has an attractive low financing data of 1.25% interest; moratorium of 5 years and a 25 year maturity tenor. a�?That the facility is already captured in the 2016-2018 Medium Term Expenditure Framework (MTEF). a�?That according to the latest Debt Management Office figures, Kaduna State has a total debt stock of USD232.1 million. a�?That approving the current loan request of USD350 million for Kaduna State will bring its total debt stock to USD582.1 million.

a�?That if this loan request is approved, the new total debt stock of USD582.1 million for Kaduna State will be unsustainable and necessarily attract huge financial burden on the meager federal allocation to the State. a�?With the new borrowing, the Debt Service to Revenue Ratio of Kaduna State will further be increased and thus impact negatively on the ability of the State to meet Other basic needs of its people.

The Business of Buying and Selling ITunes Gift Cards and Other Gift Cards.