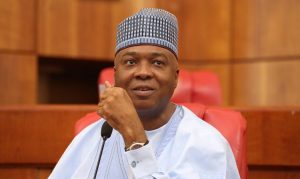 The Senate on Thursday suspend Senator Ovie Omo-Agege,  APC, Delta Central, for 90 days for acts bordering on the integrity of the upper chamber.

This even as the court has rejected an ex parte application filed by the lawmaker representing Delta Central in the Senate, Senator Ovie Omo-Agege, to stop his suspension by the Senate.

Omo-Agege, an All Progressives Congress (APC) member representing Delta Central senatorial district, had openly opposed the red chamber’s elections reordering bill and subsequently instituted a case against the Senate in court to avoid being punished for his actions.

Senate President Bukola Saraki at the plenary on Thursday emphasised on the need for serving senators to respect and preserve the integrity of the Senate.

Saraki said,  a�?Distinguished Colleagues, a number of points have been raised. One borders on the issue of preserving the integrity of this institution. To me, that is what i think is the most important thing for us.

a�?Second, is where we take actions that are not sincere. I think in this chamber, if we want to talk about who has the right to say he is chairman of a Parliamentary Support Group for Mr. President both by action and by what we have done, I think that I have the right to lead that a�� more than anyone else here.

a�?Those of us that understand politics, understand that because of our own peculiar interest, sometimes some people decide to act like they are holier than thou or more committed a�� at the expense of others. This is not something that we should tolerate, and I believe that in an institution like this we must show discipline, but at the same time we must also show compassion.

a�?Distinguished Colleagues, there must be discipline. We must show that such groups must be suspended and the case in court must be withdrawn. In consideration of that we can look at leniency on what is being recommended.a�?

According to the senate president,  a�?No more of these kind of groups in the Senate; the issue of court actions; we are not in any hurry to take anybody away from this family; and we must lay down an example by showing that there is discipline and apply some form of discipline on this matter.a�?

He added that a�?We must send out a strong message because there are some people who are fanatics and such actions will expose a lot of people and alliesa�?.

He therefore recommended that Senator Omo-Agege should; withdraw the case (in court); the support group should be disbanded; and out of compassion, we amend the recommendation of the committee to 90 days and we move forwarda�?.

a�?I hope we will not have to come to these sort of situations again at this point in this democratic process. We can cue on this and move forward,a�? he concluded.

Senator Omo-Agege had, on April 3, filed the ex-parte application before Justice Nnamdi Dimgba,of  Federal High Court in Abuja seeking the court  order that a�?all further proceedings against the plaintiff (the Senator) in respect of the allegations referred to the 1st defendant’s (Senate) Committee for Ethics, Privileges and Public Petitiona�? be halted pending the hearing and determination of his main suit.

The Delta-born senator wants the court to order parties to the main suit, earlier filed on March 26, 2018, a�?not to consider, act on or give effect to any recommendation, resolution or decision of the 1st respondent’s (Senate) Committee on Ethics, Privileges and Public Petition.a�?

The defendants to the suit are the Senate, the Senate President, Dr. Bukola Saraki, and the Attorney General of the Federation, Mr. Abubakar Malami (SAN).

Ruling, however, Justice Dimgba refused to grant the order directing parties to maintain the status quo.

The judge held that a�?in the interest of maintaining the balance of power between the judicial and the legislative organs of government,a�? he could not grant such orders without hearing from the defendants.

Rather, the judge ordered that the defendants be served with the processes in the suit to enable them to respond to the Senator’s application.

According to the Justice Dimgba, a�?It is hereby ordered as follows:

a�?That in the interest of maintaining the balance of power between the judicial and the legislative organs of government, I am not minded to granting the reliefs sought for now without hearing from the defendants.

a�?That the defendants shall be put on notice to appear before me to explain why the interim preservatory order sought should not be granted.

The judge then adjourned until Friday for hearing.

Alleged Sexual Harassment by A lecturer: UNILAG To tackle the allegation with every sense of responsibility and seriousness