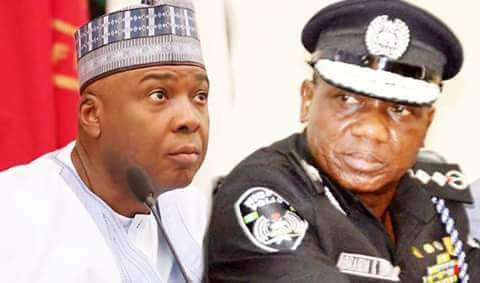 The Buhari Presidency and the All Progressives Congress (APC) national government have introduced various ugly scenarios into governance and constitutional democracy.

The tempo increases on a daily basis and the lastest is the blunt refusal and insorbodination of the Inspector General of Police, Mr Ibrahim Idris to appear before the Senate of the Federal Republic of Nigeria.

Thrice, IGP Idris failed to honour the legitimate invitation from the Senate President and the Senate, charged with oversight functions.

Its obvious that Idris is testing his powers and presidential protection under Buhari administration, being a core loyalist of Mr President.

In terms of hierarchy and seniority, the Senate President is the number three (3) citizen in Nigeria, after Buhari and Vice President Yemi Osibanjo. The IGP position is political and he can be relieved of his duties by Mr President at any time.

Common sense is critical in our day to day dealings especially in government. We have three arms of government namely; the Executive, Legislative and Judiciary.

It is clear from the above that IGP Idris lacked moral justification not to appear before the Senate and the Senate President. His refusal was and still a gross misconduct. He disobeyed constituted authority constitutionally empowered to carry out oversight functions.

What is baffling is the willingness of the IGP to spend public funds to seek redress in court over his failure to appear before the Senate. The distance between his office and National Assembly is less than 30 minutes drive and fuel consumption is also less than N5,000 but he decided to spend millions of Naira of tax payers money to question the pronouncement of the Senate President and Senate in Court.

This is a government that claims to have brought CHANGE in government and prudent management of public funds and other resources.

The question to ask Idris is; which is cheaper, spend millions of Naira to engage the Senate in a legal battle or to honour the invitation?

The IGP's fragrant display of insorbodination and absolute disrespect for the Senate of the Federal Republic of Nigeria, is to say the least, the increasing decay in Buhari Presidency.

It's obvious that the Presidency have declared an open war with the federal lawmakers as can be seen from the actions of the IGP and the stealing of Mace on the floor of the Senate during plenary without security operatives prompt intervention to stop, arrest and prosecute the culprits.

If President Buhari can invoke the Doctrine of Necessity to pay out $496 million not approved by the National Assembly; why is it not possible for the Senate to invite the IGP under the same Doctrine of Necessity? Insecurity, massive killings around the country without arrests and prosecution has been and still worrisome.

By Doctrine of Necessity, it is meant unlawful actions of state actors that are constitutional in order to address political issues and ensure stability, peace, security, et al.

Nigerians are fully aware that the Nigerian Police Force under IGP Idris has failed woefully in the arrest and prosecution of Fulani Herdsmen who are daily killing innocent law abiding citizens for no just cause and other criminal activities in the country.

The IGP and the police derives their powers and authority largely from the Police Act. It is therefore very unreasonable to quote the Police Act against the oversight functions of the Senate when it is glaring that the police has failed to secure lives and properties in Benue State and other parts of the country.

Declaring the IGP an enemy of democracy is long over due and it is valid because the IGP owes his allegiance to Nigeria and Nigerians only. Idris is not Buhari's IGP but IGP of Nigeria and for Nigerians.

It is sad to note that the Nigerian Police Force under IGP Abubakar and Buhari administration have become so powerful and insensitive to the extent that it no longer have respect for separation of powers and undermines the office of the Senate President and the functions of lawmakers at the National Assembly.

The Senate President being the number three citizen in Nigeria, can invite the IGP whenever the need arises especially when it is perceived that the police force derailed in its national duties to the people and the Nigerian Nation.

It does not matter whether or not the Buharists are overzealous, it is enough that Nigerians are disappointed over the gross misconduct; insorbodination and absolute disrespect for constituted authorities under the APC national government.

The good news is that the Peoples Democratic Party (PDP), has been rebranded, invigorated and ready to win the presidential elections in 2019. The Olusegun Obasanjo group has adopted the African Democratic Congress (ADC) to further split the APC votes in 2019.

It is also not unlikely that Senator Ahmed Tinubu who had been sidelined since 2015 till date may also spring political surprises in 2019 as a payback to the Buharists and the Northern APC.

The Asiwaju of Lagos can be very crafty politically and its the view of political analysts that Uncle Jagaban shall demand for his pound of flesh from Buhari in 2019. The Chief Odigie Oyegun group may also spring surprises in 2019.

Oyegun has been practically and technical reduced to a mere rubber stamp National Chairman of APC as all is now set to install a core Buharist, Comrade Adams Oshiomole as the party's National Chairman.

Take it or leave it, the impunity of Buharists in Buhari Presidency shall come to an abrupt end on May 29, 2019. There is no political magic, permutations and engineering that will make APC to return to power in 2019.

Recent political developments shows that even the league of past military heads of state and past civilian Presidents have ganged up against Buhari and the APC so as not to return to Aso Rock Villa in 2019.

IGP Idris must be told that the National Assembly is the chief custodian of our nascent democracy and any atom of disrespect for NASS and the Office of the Senate President of the federal republic of Nigeria is an attack on democracy and absolute disregard for the Nigerian people.

By the IGP's action, its obvious that he is no longer serving the nation, he is serving Mr President and the Buhari caucus of the APC. Idris must also be told that his office is funded by our commonwealth and not with the personal funds of Mr President.

His arrogance and disrespect for the Senate is derived from the common knowledge that the NASS cannot remove or sack him, only Mr President can. It's now in our history books that IGP Idris is the first Senior Police Officer to be declared an enemy of democracy and not fit to occupy any public office anywhere in the world.

In the light of the above, it is safe to assert that the Presidency and Mr President must take necessary steps immediately to sack IGP Abubakar. His integrity and legitimacy has been desecrated by the pronouncement of the Senate of the Federal Republic of Nigeria.

Should Buhari refuses to sack IGP Abubakar, his name will also go into our history books as the first Nigerian President to support gross official indiscipline and insorbodination by a senior public officer.

Buhari will be remembered for assisting public officers to commit sacrilege against the NASS and constitutional democracy in Nigeria.

The legal action instituted in Court by IGP Idris cannot reverse the pronouncement of the Senate.

It was done with the powers given to it by the 180 million Nigerians.

IGP Abubakar either resign or get sacked by Mr President without further delay.

Leveraging Technology To Realize The Potential Of A Data-centric Market

10 thoughts on “Senate Vs Igp Idris Abubakar: Who Is The Boss As Senate Declares Him Unfit To Hold Public Office? ”