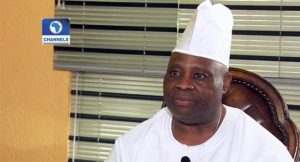 The Peoples Democratic Party's (PDP) governorship candidate for the Osun Election, Ademola Adeleke, has been arraigned at the Federal High Court in Abuja.

Mr Adeleke was arraigned by the police on a four-count charge of alleged examination malpractice alongside four others.

He and the other four pleaded not guilty to the charges.

The defendants are the principal of Ojo-Aro community grammar school Osun state, Aregbesola Muftau; the registrar of the school, Gbadamosi Ojo, a teacher in the school, Dare Olutope, and the senator's cousin, Sikiru Adeleke.

The prosecution accused three of the defendants of fraudulently registering Senator Adeleke and his cousin, as students of Ojo-aro community grammar school, in Osun State, for the National Examination Council's June/July 2017 Senior School Certificate Examination in February 2017.

Three of the defendants, including Senator Adeleke, were thereafter granted bail, having filed their separate bail applications ahead of today's arraignment.

The court ordered him to deposit his international passport with the registrar.

13 thoughts on “Senator Adeleke, four others arraigned By Police Senator for exam malpractice”