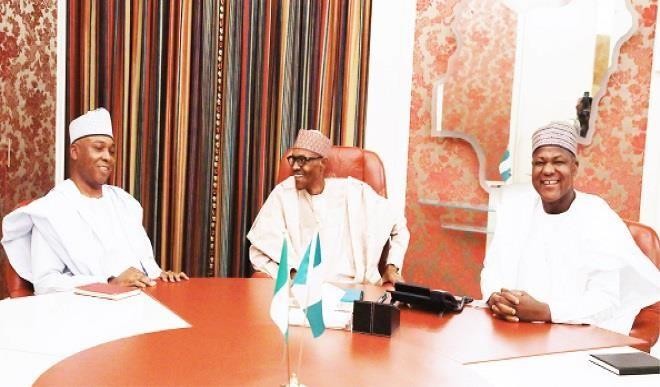 President Muhammadu Buhari on Monday met behind closed doors with the President of the Senate, Bukola Saraki; and the Speaker of the House of Representatives, Yakubu Dogara.

The meeting was held inside the Presidential Villa, Abuja shortly after Buhari returned from his weekend trip to his hometown, Daura in Katsina State.

At the end of the meeting, Saraki and Dogara told State House correspondents that they reported the Inspector-General of Police, Ibrahim Idris, to the President over his handling of the case involving Senator Dino Melaye and his disdain for the National Assembly.

They also said the meeting which was at the instance of the President discussed the issue of the 2018 Appropriation Bill still before the National Assembly, the recent invasion of the Senate during which the mace was taken away and the fallouts or Buhari’s recent visit to the United States of America during which he met the US President, Donald Trump.

They, however, said the issue of the impeachment process being contemplated in the National Assembly over Buhari’s approval for the payment of $496m for fighter jets before he sought the approval of the Federal lawmakers was not discussed at the meeting.

“We came on the invitation of Mr. President. He wanted to brief us on his trip to the United States and also the issue of the budget.

“We also talked on the issue of concerns to us: the invasion of the National Assembly, which he showed great concern and he said action will be taken to investigate that,” Saraki said.

Saraki said the President saw the invasion of the Senate as an embarrassment to the country and promised that the incident would be properly investigated because it was not just about the National Assembly but about the country.

When asked what was being done to improve the relationship between the executive and the legislature, Saraki said the National Assembly had always been ready to support the Executive.

“Our being here was the initiative of Mr. President to brief us on his visit to America and to engage in discussions and I think that is a good sign.

“We, at the National Assembly, have always been ready to give all our support to the executive and we will continue to work along those lines.

“As I said, the presidential system that we operate, we sometimes have the responsibility to check the excesses of the executive. So, there will always be times we will disagree but by and large, we will always work for the interest of Nigerians and always keep on moving on,” he said.