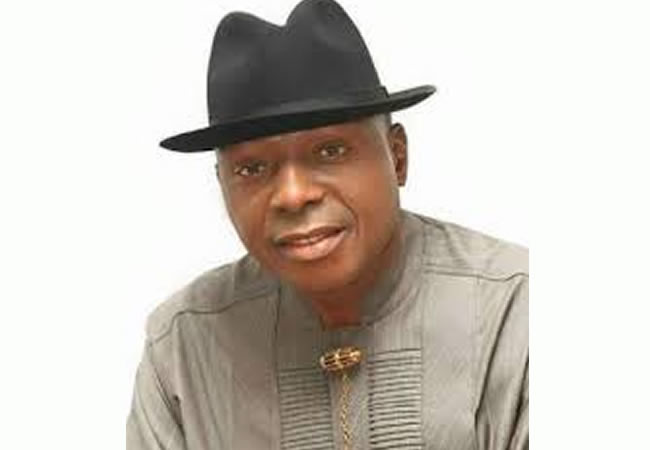 Senator Kames Manager, the fifth-term senator representing Delta south senatorial district and one of the longest serving senators in the national assembly has strongly discounted speculations that he was awarded a jaw-dropping 300 contracts by the Niger Delta Development Commission (NDDC); 120 of which have already been fully paid, whereas the contracts have not been executed.

In a statement issued from an undisclosed location abroad where Manager is currently sojourning on “official duty” the senator said widespread speculations that he was the one named in the shocking revelation by the controversial NNDC Interim Management Committee (IMC); to the effect that a senator from Delta state was awarded 300 contracts was baseless and entirely without merit.

Despite the public outcry over the appointment of the IMC by Niger Delta Minister, Godswill Akpabio, the interim committee has gone to work reviewing the operations of the agency; which is the subject of a forensic audit ordered by President Muhammadu Buhari. In one of its first moves amid growing clamors for the IMC to be disbanded, the committee disclosed that preliminary review of NNDC operations revealed that “a particular serving senator from Delta State is handling 300 projects from the commission (NDDC), 120 of which have been fully paid for whereas the jobs have not been done.”

The blockbuster revelations provoked wild speculations as to the identity of the senator; which the IMC, through its spokesperson, Cairo Ojuigboh did not name. But in a surprise reaction, Senator Manager dismissed the IMC allegations as a distraction and sinister gimmick to hang onto office, daring Ojuigboh to name the senator in question. “Three Hundred contracts by one person from the same organisation? How? Even registered and full time contractors cannot be that lucky, let alone a serving lawmaker,” Manager said.

He dismissed the pledge by the IMC that its mission is to clean the stable at NNDC, and will not be in office for more than six months as a diversionary ploy, saying the forensic audit ordered by the president; which the IMC was appointed by Akpabio to supervise and oversee will most likely not be completed in six months or even in a year.

Manager’s reaction has raised certain posers across public opinion, as commentators have been wondering why he felt compelled to respond even though the IMC did not mention his name. There are three senators representing Delta State and it remains uncertain why Senator Manager chose to speak on behalf of all three senators from Delta State.

“Is it because he is the longest serving senator from the state? Or is it because he has continued to be the Chairman, senate committee of the NDDC for over ten years? Did he think the fingers of accusation are pointing in his direction? Is it that he does contracts with NDDC but just not as much as mentioned by the IMC? Is he daring the IMC so the attention will shift from him?”

Huhuonline.com learnt from IMC sources that a senator from the Niger Delta region was awarded a N350 million contract to fence a village school whose value was estimated to be less than N100 million. The IMC has said the EFCC has been briefed on the anomaly and the said senator would soon be invited.

But pray, what organization will award 300 contracts to one person, no matter how many different phoney companies such an individual presents?

“Was the IMC merely exaggerating the number of the contracts? Isi t really true that one man collected that much contracts? Is it true that 120 contracts have been fully paid for without evidence of job completion? Who approved those payments? Indeed, if the alarm raised by the IMC is true, it will not only explain why the region remains decrepit, it will indeed justify the need for the forensic audit as ordered by President Buhari.

Meanwhile, the House of Representatives yesterday resolved to halt further consideration of the 2020 budget of Ministry of Niger Delta Affairs over the appointment of the interim committee to manage the affairs of the Commission. The lower legislative chamber also urged the Senate to stop further action on the ministry’s budget over the “illegal appointment.”

The resolution followed a matter of public urgent importance on the urgent need to stop the “illegality in the Niger Delta Development Commission (NDDC)” moved by Ossai Ossai. Leading the debate, he told his colleagues that the appointment was at variance with the agency’s enabling law, stating that the most senior director in the commission ought to replace the acting Managing Director that was sacked by Minister Akpabio.

Ossai said the haste with which the minister constituted the three-member panel gave room for suspicion. He noted that since the Senate had approved the appointment of the 15-man board members sent by President Buhari for composition of the commission, the interim committee constituted by the minister should be disbanded.

Ruling on the motion, Speaker Femi Gbajabiamila directed the House Committee on NDDC to investigate the matter and report back in two weeks.

​Benue Wage Bill: The Fraud Is Still On