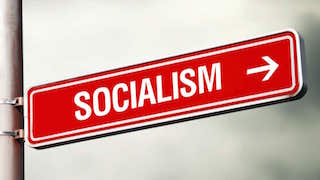 How do you define socialism, especially when it comes to having a “socialist”, Bernie Sanders, one of the most popular candidates to be the next president of the USA? Or the next Prime Minister of Spain a “Socialist”?

To start with, real socialism means that the government, representing all the people, owns all the land. Land cannot be bought or sold, only used.

When you build a house, plant an orchard or a field of wheat, you are creating value with your labor and the roof over your head or the fruit of the fields belongs to you. But not the land itself.

How can you own something you did not create? You built your house so you can sell it but not the land it sits on. Without a house on it the land itself cannot be sold.

Ownership of land is something foreign to socialism and any society that allows for this is not socialist, period. All the land belongs to all the people not to any individual.

There are many other questions in defining what is and isn’t real socialism including just how much of the means of production the government must own before the people lose control of their society. How equal the society, “democratic” in the true meaning of the word, is. How great is the difference between the social strata, the well

of and not so well off? Another sign post of socialism, a question that gives a sort of false impression of Bernie Sanders, is free universal education and health care.

National service? Yes, a must, all young adults in a socialist country must begin their life’s journey after finishing their schooling, which was paid for by the people, by serving the people. By doing their national service be it they are teachers, doctors, mechanics or soldiers.

Contributing directly towards society’s betterment, for the common good, is everyone’s first duty in a socialist country. To put it simply you don’t put yourself and your family first, you put your community, collective unity and protection first.

I have lived in Eritrea, a socialist country (though we aren’t officially one), for 13 years. I see every day the good and not so good of a society struggling to build a new socialist way of life.

Eritreans fighting for their independence during the 30 war experienced this, maybe for the first time in history. Everyone shared equally, you did your job, be it manning a trench or logistics in the rear for what you needed to survive, your daily bread (boj-boj). Your survival needs, food, water, shelter, medical and education, were supplied by the peoples movement for national liberation and money played no role in this earliest form of modern “communism”. The planet will need just such effort and sacrifice in the future.

Real socialism is going to be required for the survival of the human species as the looming climate catastrophe will bring world wide apocalyptic droughts and famines unseen in human history. Food security will be the first priority and only socialism and uniting the efforts of all the people will allow this to be a reality.

Here in Eritrea the socialist leadership of the country has focussed on food security as essential to national security and instituted a massive water conservation and irrigation policy since independence. Without year round rivers anywhere in our country damming water run off for year round use is essential, without this we will not survive as a society for scientists predict droughts, 5 or even 10 year droughts, plaguing the planet in years to come. These droughts are caused by man made climate change with the western industrialized country’s mainly to blame for the damage already done to the environment.

When a country’s main industry is agriculture, as here in Eritrea, and the rains fail repeatedly, the whole society is crippled. Yet those climate criminals in the West causing this disaster blame us and the leaders we support here in Eritrea for our poverty fueled by the crisis they caused, drought.

Recently with the outbreak of peace here in the Horn of Africa our neighbors have sent their leaders here to Eritrea to see our massive dams and irrigation projects and just what can and must be done to prepare for the coming drought driven climatic apocalypse and the mass world wide starvation that will accompany it.

When it comes to water conservation and food security the strides made by Eritrea show the way for the rest of Africa. Socialism in action not empty rhetoric, preparing to meet the peoples needs in the coming years of drought and famine.

A genuine socialist society is at the vanguard in this regard in East Africa with Eritrea increasingly being recognized as a role model in many fields be it the outbreak of peace to food security and self sufficiency. The goal is to transform the Horn of Hunger and War into the Horn of Peace and Plenty. Or at least enough to get by. You know,

“Enough is Plenty” as the saying goes?
A rich Eritrea without rich Eritreans, I may not see it in my lifetime but its where we are headed no matter the climate disasters and western instigated roadblocks thrown in our way. It’s called real socialism and has been paid for in the blood and hard work of the Eritrean people, not the fake kind of socialism Bernie Sanders or the Spanish PM to be claim as their own.

Jonathan's Book of Politics And Its Sceptics

Leadership, the Nation and its’ Future