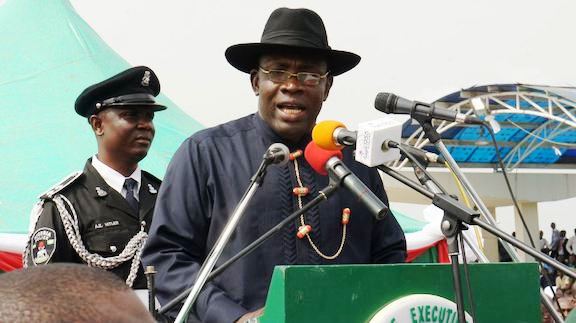 Henry Seriake Dickson, the countryman Governor of Bayelsa State, is an engaging personality, highly cultivated, courageous and exuding a charming comportment. A proud Ijaw man whose progeny stretches far into the throbbing southwest town of Ijebu-Ode(where his great grandmother comes from and was a princess),Dickson is unmistakablypassionate about Nigeria. Suffice to say none of the current set of governors, not even in the southern region of Nigeria where the clamour for restructuring originates and has been loudest, has been as appealingly erudite and turned-on on the troubling question of Nigeria’s deeply flawed federal system as Dickson has.

The recent public presentation in Abuja of a revised version of Chido Onumah’s provocative book,We Are All Biafrans, published by Premium Times Books, provided yet another platform for Dickson to advertise his fervent support for the restructuring of the Nigerian political and economic architecture to suit the multi-ethnic, multi-religious and multi-cultural nature of the country. Besides, the event underscored his consistency on this subject as well as impatience, and disgust, with thelackadaisical manner with which the challenges of governance and nation building are being handled by successive leaders in the country.

As in the lecture he delivered on July 12, 2018, at the Obafemi Awolowo University Ile-Ife entitled Restructuring and the Search for a Productive Nigeria, Dickson, who was the guest speaker at the book event, praised the founding fathers for adopting federalism, saying it is the ideal system for a country of Nigeria’s makeup. Rather thansymbolizing a sympathetic take on the disturbing activities of separatists and consequently affirming solidarity for the concept of Biafra as would suggest by its title at a first glance,Chido’s latest book is indeed a frontal disavowal and a standing rebuke of the Biafran thought. Thus, We Are All Biafrans is a riveting metaphor of the Nigerian condition in which not just Biafra but every single section of the country has become a victim of the unitary system that has become the order of the day.

In other words, from the dry grasslands of Kaura-Namoda to the polluted creeks of Ekeremor; from the erosion-ravaged communities in the eastern states, through the neglected rural hamlets in the western interior, down to their counterparts in the middle belt states, the evil mark of injustice and mis-governance in varying forms loom large. Every nook and cranny of the Nigerian space is infested with the scourge of a crooked federal structure. So, rather than just the eastern flank of the country as pushed by the separatists, the entire national landscape is Chido’s Biafra. Regardless of ethnicity, religion, culture and gender, we are all short-changed; we are all maltreated; we are all abused; we are all marginalized. We are all Biafrans.

And this all-encompassing and borderless Biafra of Chido’s imagination is the Biafra that Dickson believes in. Not the geographical Biafra promoted by those who want to cut away from the country. In any case, his solution to getting rid of the Biafra of equal opportunity misery is not to agitate for a new country, but to work hard for a new Nigeria. Says Dickson: “Let us be very clear, this is our country. No one owns this country more than the other. I will rather want to join forces to fight for a new Nigeria this country needs. We need a new Nigeria for the weak and the strong, an egalitarian Nigeria, a nation of justice and equal opportunities. But not the idea of balkanizing. We are not going to leave this country…If all is well no one will talk of moving out.”

Dickson sure understands the issues, but he is also quick to concede that he doesn’t have all the answers. He says: “What did our founding fathers do that we are failing to do. They sat down, dialogued, disagreed, sometimes walking out of conferences. We shouldn’t be afraid of disagreeing. In fact, we need more disagreement. But the important thing is whether we agree or disagree, it should be in the national interest.”

For him, Nigeria needs to be restructured for it to have any meaningful grip on progress. This is the growing sentiment among the populace who believe that Nigeria is not working because of the skewed federal system—with its perpetual over-centralization—foisted by the military since 1966.A key feature in the restructuring now being demanded is to go back to pre-1966 period which scholars have described as the “golden era” of Nigeria’s federalism. That period was marked essentially by the devolution of power from the centre to the federating units.

Professor LadipoAdamolekun, foremost Nigerian scholarand public administrator, had lamented the “bastardization” of Nigeria’s federalism in a paper, The Nigerian Federation at the Crossroads: The Way Forward. The paper, published in Publius: The Journal of Federalismin 2005, was a commemorative piece on 50 years of the country’s federalism. In it, Adamolekun had said, “Only devolution can unleash the forces for consolidating democracy and achieving accelerated socio-economic progress in Nigeria.” His grim prediction that the alternative to devolution “will likely be the death of the federation” should be an enduring food for thought for all.

This type of prediction is what Dickson fears would come to pass if restructuring does not happen in the shortest possible time. He regrets that even as the report of the ruling All Progressives Congress committee on restructuring and devolution of power favours the process, President Muhammadu Buhari clearly does not seem comfortable with restructuring. But Dickson is forging ahead with this crusadeknowing full well that Nigeria cannot continue to be run under a system stacked with unitary features. It remains to be seen whether the 2019 election would indeed be a referendum on restructuring as he and some other leading proponents have said.

What is clear though is that should the delay to embark on restructuring the country continue for much longer, chances are there may not be a country to restructure in the end.

Godwin Onyeacholem writes from Abuja and can be reached through Email: [email protected]

Codiv-19: Open Letter To State Houses Of Assembly And The National Assembly.

Chief Femi Fani-Kayode Reflects On The Amalgamation Of Nigeria

24 thoughts on “Seriake Dickson and the quest for restructuring”