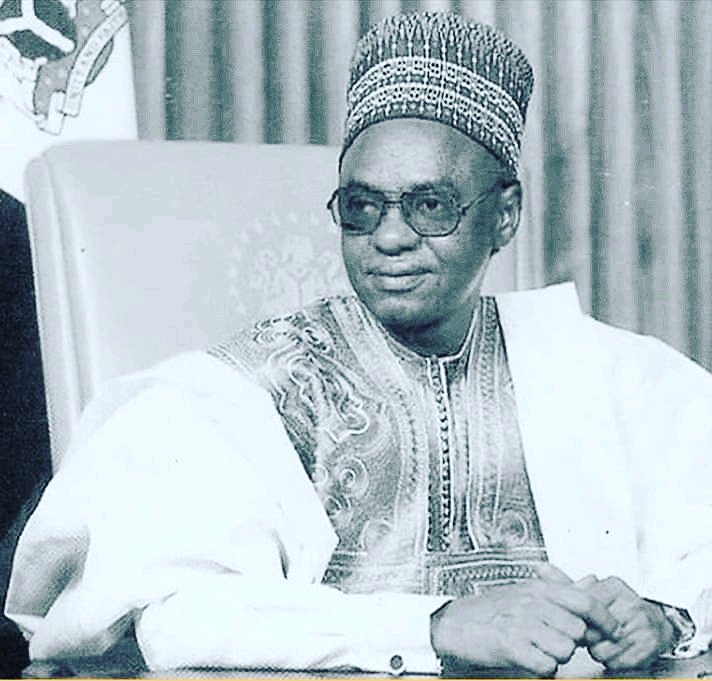 Shehu Shagari was certainly a peace loving Democrat while in government(s). He headed some departments before he became a consensus Presidential candidate for the National Party of Nigeria (NPN) in 1979. But we also saw another part of Shagari during the election campaign for his second term in 1983. He might be humble and not had been crafty himself since he was surrounded by men desperate to hang on to power in the second term.

Shagari allowed the hawks in his party, NPN to take advantage of his gentility. As a reluctant consensus candidate for President in his first term, he was willing to serve only a term. NPN was going to rotate the Presidency every term between North and South to erase distrust and retain the newly acquired democracy so that there would be no opportunity for the military to come back. Come back, they did in December 1983.

Moshood Abiola counted on rotation promise in 1979 and invested heavily in his Party, NPN. Abiola’s Newspaper, The Concord took every chance they had to blast the Opposition parties, especially Unity Party of Nigeria and its leader Chief Obafemi Awolowo. Abiola and Dele Giwa, the Editor of Concord Newspaper always had derogatory remarks about Awolowo so much that some Yoruba leaders cautioned Abiola, to prevent the repeat of Awolowo/Akintola problem.

NPN came to power in the first place after the controversial interpretation of what was the definition of two third of Nigeria’s nineteen states before a party could claim the mandate after an election to avoid a runoff between two leading parties. Chief Richard Akinjide, NPN Chief legal Counsel interpreted Nigeria's two-third as three quarters of a state rather than a whole state prevailed; 13 out of 19 states proponents lost.

It was a contentious case between UPN and NPN since NPP only won Anambra, Imo and Plateau with the support of Solomon Lar. NPN won Bauchi, Benue, Cross River, Gongola, Kaduna, Kwara, Niger and Sokoto. UPN won in Bendel, Lagos, Ogun, Ondo and Oyo. Nevertheless, none of the parties had enough spread between North and South. The alliance could have been formed if the two leading parties went into runoff.

UPN claimed NPN had not obtain the 13 states needed to prevent a runoff under the Constitution. Though NPN won more out of the total 19 states then, they would not take the risk of inconclusive election and go toe to toe with UPN again. Even Nigerians were divided on the interpretation of two third and if a state could be so divided. The Supreme Court finally decided in favor of NPN and its legal Chief Counsel, Akinjide.

General Olusegun Obasanjo, the Strongman that handed the transfer of Military Government to civilians, was eager to leave after the bloody coup that killed his leader General Murtala Muhammed who he succeeded. Moreover, he was not inclined to hand over to a man, like Chief Awolowo that promised to probe the Military Government if he had won. What a politician, eh?

The old military mentality under Gen Aguiyi Ironsi after Nzeogwu Coup that came to sanitize the government had changed when we saw locally assembled Peugeot cars used as official vehicles replaced with Mercedes Benz. Contracts from the Military Government had become fronts for joint partnerships between military boys and civilians. The militricians no longer lived in the Army Barracks, they moved to Government Reserve Area like the politicians.

This corruption that later stunk to high heavens was the main mission that the coup of Mohammed/Obasanjo came in to eradicate. Mohammed forfeited his loot from the War to the Government and Obasanjo left Office only to become broke. Those were days we may not see again because Obasanjo came back later as a civilian President in 1999 to recoup what he forgot or left behind as a military President: loot.

Indeed, General Gowon had boasted after the War, that money was not Nigeria’s problem but how to spend it. In a way, he was right because they spent it like a drunken sailor. Umaru Dikko under Shagari will forever be remembered for his statement that nobody was suffering in Nigeria and challenged anybody to point to a sane man in Nigeria picking anything from the trash on the street as the poor did in America!

By the time Shagari took over in 1979 from Obasanjo, corruption reared its ugly head again. All the financial prudence implement after the war when Awolowo had been the Finance Minister under Gowon in the late 60s went through the window. Nigeria no longer farmed, manufactured or assembled vehicles since oil money was flowing like honey and wara that could easily pay for imports.

Akinjide that became Attorney General in Shagari Government, labelled Awolowo as a Prophet of Doom because Awo had warned Nigerians against corruption, reckless spending and senseless imports by Shehu Shagari Government. All measured put in place to conserve foreign income were relax in favor of imports from toothpicks to pins. Awo’s caution was dismissed.

Nigerians could not wait for the following election to throw out the prodigal sons of a she-dog. Shagari ministers were dividing contracts and properties among themselves. Some were even bragged and celebrated becoming U.S dollars or pounds Billionaires abroad. Chei, unheard of!

When 1983 Election came. NPN rigged massively returning Shagari to power. People were dumbfounded and could not believe that their disapproval against corruption was taken for granted. More important, it had not registered in their votes. The same people praising Buhari after his death and blaming Buhari now, were celebrating when Buhari struck. Who else could have overthrown Hausa head of Government bloodlessly but Buhari?

There are many speculations why Buhari and Idiagbon struck but Nigerians were relieved! While it is true that Buhari was known as a religious fanatic, his abhorrence for corruption was not in doubt. Buhari and Idiagbon lived up to their reputation. They sanitized the polity and Government. Operation War Against Indiscipline, WAI was entrenched and discipline returned to the polity. Yes, we also paid a price of lack of civil liberty but had financial discipline.

Shey na demon-crazy we go chop? If anything, Buhari/Idiagbon were too drastic and civil organizations accused Buhari and Idiagbon of extreme dictatorship. Some claimed that people were disappearing in the name of Idiagbon overnight. Actually the mere mention of Idiagbon was enough to form an orderly queue no matter where you were. Even police and civil servants were afraid to take bribes on the road or anywhere else.

While Idiagbon was in Mecca on pilgrimage, Babangida and Abacha struck. The reason they did, according to speculation, was that Babangida drug dealing, contracts and loot were about to be exposed. Buhari was ready to deal with him after his case was discussed within the military cabinet leadership. Someone leaked it to Babangida and he overthrew Buhari.

No federal character, no national soul

6 thoughts on “Shagari Overthrow By Buhari Was Celebrated”