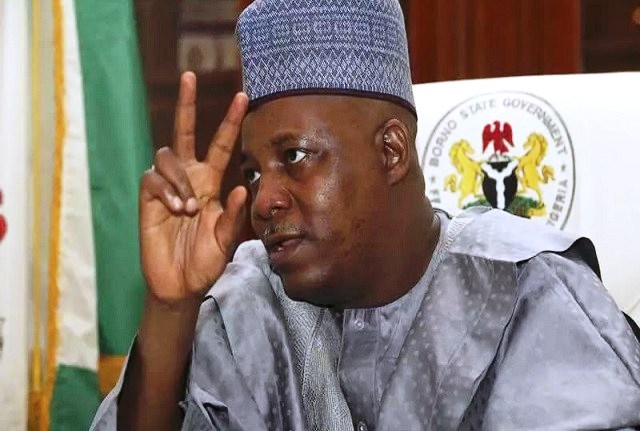 Givernor Kashim Shettima of Borno state has announced a donation of N5 million to each of the 27 local government areas of the state on Monday for onward disbursement to APC women and youths groups in each of the LGAs.

He also donated 81 bundles of wrappers for onward distribution to the APC women and youth groups in the 27 local government areas in appreciation of their support and solidity to the APC ruling party in the state and country at large.

The governor who made the announcement while addressing thousands of women and youths that converged at the Multi Purpose Hall of the Government House Maiduguri Monday to congratulate the governor on his successful election as the senator elect representing Borno central senatorial district at the National Assembly at the expiration of his second tenure as governor of Borno state.

The Deputy Women Leader, Borno state Chapter,Hajiya Fati India said the women were also at the government house to register their loyalty ,support and solicit for the support and cooperation of the state party machinery and government on their mandate aside showcasing their appreciation.

She pledged to mobilise more women and youths to ensure victory of all the APC candidates in the forthcoming Saturday , 9th March 2019 governorship and state house of assembly elections.

The Deputy State Women Leader however asuired that all APC women and youths supporters will come out enmasse to vote for the success of the party more in the next level.

Borno State APC Chairman, Ali Bukar Dalori thanked the groups and assured them that the party will continue to give them all the necessary support and encouragement towards achieving the aims and objectives of the party.

Similarly, Governor Shettima has also announced a donation of N3 million and 2,000 bundles of wrappers for the 30 registered women and youths groups from Gwange area of Maiduguri Metropolitan Council (MMC) that gathered at Gwange IV Primary School, Sabon Layi, Gwange, Maiduguri on Monday to show their solidarity to the governor and party.

Describing the women and youths groups as the pillars of the APC ruling party, the govenror said, “the party and government are proud of you and appreciate your strength as well as massive turn out and vote during the last 2019 general elections”

He also urged them to come out again en masse to vote all APC candidates , pointing out that, “there is no doubt to say that, you are trustworthy and we appreciate you”.

“We love you and will continue to relate with you as true voters card holders and supporters of APC. We shall always be with you and we thank you too, so much for your support”, Shettima said.

The Borno State Chairman, APC, Ali Bukar Dalori thanked the women and youths as well reassured them that, they wouldnt be left behind in the scheme of things in moving the state forward.

PHOTO: Throwback picture of Aisha Buhari as a young woman